This summer, I attended my first National Havurah Committee Summer Institute. Part of each day at the Institute is devoted to workshops, one-hour sessions created by anyone attending who wants to share something they care about with the other attendees. I was strongly encouraged to offer a workshop or two… the workshop coordinator happened to be sleeping on my couch while putting together the schedule. I flippantly offered to offer a workshop on the subject about which I know the most: showtunes. And because I’m a wise-ass, I said, “Let’s call it ‘Social Justice Showtunes.'” I imagined the Institute crowd would eat that shit up.
Turns out, I was right. Not only did people flock to the workshop, my Facebook friends were also interested in hearing more. So, over the next several weeks, I will be presenting here a series on Social Justice Showtunes, featuring songs from the musical stage, written by Jews, about social justice issues. 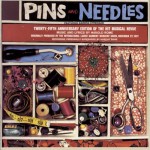 Sing Me A Song With Social Significance
from Pins and Needles
Music & Lyrics by Harold Rome
Premiere: November 27, 1937
[audio:https://s3.wasabisys.com/selfagency-host/jewschool.com/sing-me-a-song-with-social-significance-1.mp3] Buy the CD! | Buy the mp3!
(Performed here by Rose Marie Jun, from the 25th Anniversary Recording.)
Today is Labor Day in the United States of America. Apparently, in Canada, Bermuda. and elsewhere, today is Labour Day. While Labor Day may be no more a Jewish holiday than, say, Yom Yerushalayim, both holidays are alike in their origins, growing out of political movements spearheaded by secular Jews.
(Yes, it’s an oversimplification to call the Labor Movement a political movement spearheaded by secular Jews. However, the Jewish Labor Committee has an extensive bibliography about the history of Jews in the Labor Movement if you’d like to learn more.)
At any rate, I certainly learned about the Jewish involvement in the labor movement and union organizing way back when in my synagogue’s afternoon Hebrew School. By the time of my Bar Mitzvah, I knew more about the Triangle Shirtwaist Fire than I did about anything that happened in the Tanakh between Sampson and King David.

But as with many other subjects in the world, I’ve learned even more about the Labor Movement through showtunes than I ever did in Hebrew School. Much of that knowledge comes from my familiarity with a musical called Pins and Needles .
In the mid-1930s, the International Ladies’ Garment Workers’ Union had grown so large that the union invested in forming a Cultural Division charged with spreading the union’s values to its members through the arts. Pins and Needles was a revue, a collection of songs and scenes, that grew from this effort. It was so popular that it moved to Broadway and ran for years, even getting updated as headlines changed. This show was particularly special because all the performers in the original production were members of the ILGWU. Dressmakers, cutters, embroiderers, et al took a break from the factories to sing and dance on the Broadway stage. Harold Rome, the composer & lyricist, later reflected, “I didn’t realize that the big attraction was that the garment workers themselves were doing the show and singing to the audience, creating a rapport which is very rare in the theater.”
The song “Sing Me A Song With Social Significance,” which you can hear if you click on the icon above, was the opening number of the show. Although there had been topical revues prior to this one, this song announced a new kind of topicality. Pins and Needles wouldn’t just take pot-shots at the news and events of the day. This was a show with purpose.
In 1937, the original cast album hadn’t been invented yet. (Snow White and the Seven Dwarfs was the first musical film to issue a soundtrack album, in 1937. Oklahoma was the first original cast album in the contemporary sense, although there were earlier albums that captured songs from musicals sung by the performers who introduced them. But I digress…) A few singles from the score were recorded, but only one got any significant airplay. In the words of Rome, “‘Social Significance’ in those days was not for our airwaves.” (He wrote that in the early 1960s, when Social Significance was definitely on the airwaves. How sad that we’ve since regressed.)
Fifteen songs from the show were eventually recorded in 1962 for a twenty-fifth anniversary recording. Two singles recorded by members of the original cast were released on CD as part of a boxed set a dozen years ago (that now appears to be out of print). And Rome himself some of the songs in the 1950s. It is from one of those collections, A Touch of Rome that I draw the song I want to leave you all with for Labor Day: 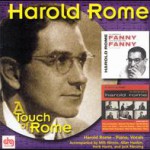 It’s Better With A Union Man
From the album A Touch of Rome
[audio:https://s3.wasabisys.com/selfagency-host/jewschool.com/ts-better-with-a-union-man.mp3] Buy the CD!
(Performed here by the songwriter.)
It’s interesting to me the difference between songs like this and the more straightforward and earnest protest songs of the 1960s. However, RubyK tells me that this song in particular fits in with the tradition of union organizing songs from the turn of the century, which makes sense given the circumstances of the creation of this show. It’s also interesting to me how racy the song is. We tend to imagine the ’30s as a more innocent time, but this song doesn’t really mince words in describing the sex life of the sweet little sewing machine girl. It’s interesting that the version recorded for the twenty-fifth anniversary recording whitewashed some of the lyrics. Who would have thought the version from the 60s would be cleaned up, while the version from the 30s was more explicit? History and memory are funny things.
As we look at other Social Justice Showtunes in the coming weeks, it will be interesting to consider the techniques the songwriters use to get their messages across in the context of the times they were writing. Stay tuned.

A couple of notes, as post scripts:
I am half-thinking about creating a curriculum from this series to use with my teens, pairing the songs with traditional Jewish texts and historical documents. Feel free to suggest texts you’d pair with these songs in the comments!
I also want to acknowledge my discomfort at posting these songs here, particularly in a post about unions. These aren’t my songs to post, and I’ll fully admit to a fairly limited understanding of how “fair use” works. That’s why I’ve only offered them as streaming files, and with a relatively lousy bit rate. That’s also why I’ve included links to purchase the albums from which these songs are drawn. If you enjoy these songs or want to learn more, please purchase the albums. Yes, the Pins and Needles album is owned by a giant corporation (although A Touch of Rome is on a small, independent label), and thanks to the way AFTRA and AFofM negotiated payment for singers on these kinds of albums, it’s not like any of the performers involved get paid because you buy a CD half a century later. (Hell, Harold Rome has been dead 16 years, so even he doesn’t stand to gain.) But on the other hand, the showtune is an endangered species, and every purchase helps keep it alive.
Finally, in the interest of full disclosure, if I did things right, you purchasing albums through these links will benefit Jewschool.com, with a percentage of your purchase price coming back to help fund the operation of this site.

Information Wants to be Free