This is the third post in a series on Social Justice Showtunes. The series starts here with a post about the 1937 Broadway musical Pins and Needles and continues here with a post about the 1932 song “Brother, Can You Spare a Dime?”
Today’s entry to the series is probably the most well-known of the songs we’ll be examining. “Carefully Taught” was introduced in 1949, when South Pacific premiered on Broadway. Based on James Michener’s Pulitzer Prize-winning novel Tales of the South Pacific, Rodgers & Hammerstein’s show addressed racial intolerance head-on, which went on to win its own Pulitzer Prize for Drama in 1950. 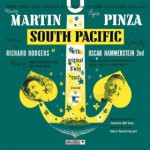 Carefully Taught
from South Pacific
Music by Richard Rodgers
Lyrics by Oscar Hammerstein II
Premiere: April 7, 1949
[audio:https://s3.wasabisys.com/selfagency-host/jewschool.com/youve-got-to-be-carefully-taught.mp3] Buy the CD!
(Performed by William Tabbert, from the Original Cast Recording.)
As a stand-alone number, the song is a strong message against racism in general, and against unquestioningly accepting the values of one’s parents more specifically. Although there wasn’t a great deal of public backlash against the song, Michener recalled that the authors had faced some pressure to drop this song from the show, but, in Michener’s words, “This number represented why they had wanted to do the play and even if it meant failure of the production it was going to stay in… Courage and determination such as this counts for something in art.”
The show holds a special place in the history of the American musical, and a special fascination for fans of the form. The show represented a big step forward in Rodgers & Hammerstein’s creation of the musical-drama (as opposed to musical comedy), and Josh Logan’s direction was produced one of the first stage plays to adopt cinematic scene transitions. The show has been filmed twice (once for cinemas, once for television), and an all-star concert was also captured for PBS. The show has become a permanent feature of the high school and community theater circuits, and in the 1999-2000 season (the 50th anniversary of the show’s premiere), I must have seen a half-dozen productions around Los Angeles.

Today, South Pacific is once again running on Broadway, in a smash-hit revival at Lincoln Center. This summer, I saw the show live again for the first time in about ten years. In context, the song is sung by a young lieutenant who has fallen in love with a native Polynesian girl. He’s singing to a older French planter whose love affair with a young nurse has fallen apart over the nurse’s disgust at discovering her planter has previously been married to a Polynesian woman.
I attended the show with a dear friend of mine, who happens to be Jewish and biracial, and her parents. Her parents were swept away by the show, but my friend was left with a bad taste in her mouth. You see, for all Lt. Cable’s protestations of his love for Liat, the Polynesian girl, all we’ve seen of their relationship has been strictly physical. They don’t even speak a common language. My friend, unable (or unwilling) to be swept up in the romantic idea of the white air force office rescuing the native girl from her arranged marriage to a wealthy, elderly planter, could only see a naive young girl being rescued from one kind of concubinage only to enter a different kind of love-slavery. (It doesn’t help that both relationships — the one with Cable and the one with the planter — are orchestrated by Liat’s wily mother, Bloody Mary.)
Honestly, I was sort of split on the issue – I hadn’t considered it in that light before. I was also very sleepy the night we saw the show, so I jumped at the chance to catch a matinée later in the summer, this time with my parents and brother. Again, I found the show to be a little long for my taste — director Bartlet Sher has restored a song cut from the original production and added some extra lines here and there (in part to emphasize the young nurse heroine’s racist upbringing), and if you ask me, a two-and-a-half hour show doesn’t need any lengthening. But aside from the length, I couldn’t get my friend’s criticism out of my head, and this time I could only see the relationship between Cable and Liat as exploitative (albeit exploitative in both directions).
And yet, it’s hard to deny the impact the story had on its original audiences, and that it still has on audiences today. The song itself still resonates, and artists continue to record it sixty years after its debut. One of my colleagues in the world of Jewish education keeps the lyrics framed on his office wall alongside quotes from great rabbis as a reminder of the full range of our responsibilities as educators.
As we enter the new year together, I hope we can all think about the ways we teach the next generation and renew our commitment to creating a future free from hate and fear.
If you’re interested in learning about a Jewish organization working on creating a Jewish community free from hate and fear, check out The Jewish Multiracial Network. To quote from their mission statement:

The mission of the Jewish Multiracial Network is to build a community of Jews of color and multiracial Jewish families for mutual support, learning, and empowerment. Through education and advocacy, we seek to enrich Jewish communal life by incorporating our diverse racial and ethnic heritages.

They’re doing important work. Check out their website for information on upcoming events and the resources they have to offer, and consider how you may help make your own Jewish community more inclusive of all Jews.
For more information about the Jewish influences on, and activities of Rodgers & Hammerstein, check out Making Americans: Jews and the Broadway Musical by Andrea Most, which also features an entire chapter on “Carefully Taught.”