This is the fourth post in a series on Social Justice Showtunes. The series starts here with a post about the 1937 Broadway musical Pins and Needles and continues here with a post about the 1932 song “Brother, Can You Spare a Dime?” and here with a post about South Pacific’s “Carefully Taught.”
Many of the best musicals had their origins in earlier theatrical works, from Oklahoma! (based on Lynn Riggs’ Green Grow the Lilacs) to The Fantasticks (based on Edmund Rostand’s Les Romantiques) to West Side Story (based on William Shakespeare’s Romeo and Juliet). Today’s entry comes from the musical version of Clifford Odets’ 1937 play Golden Boy. The original told the story of an Italian-American kid in the Depression who dreams of a career as a concert violinist, seeing a career in boxing as his only way out of the lower class.

For the musical version, Odets was recruited to adapt his own play on the strength of the new lead – multimedia sensation Sammy Davis, Jr. In the musical update, the hero’s struggle was given an added dimension in the form of an interracial love affair — still illegal in many states, and mirroring Davis’s own real-life marriage to May Britt. Odets was at a low point in his career, suffering from the blacklist and nearly broke, so despite his ambivalence towards musical theater, he was happy to be working and thrilled to have Sammy Davis, Jr. signed on.
The show was fully integrated, and it featured a kiss between the lovers, which caused quite a stir during the show’s tryouts. Davis and the rest of the company reported receiving death threats for the involvement in the show, but it was ultimately successful.
This song comes about halfway through the second act, when (SPOILER ALERT!) the lovers have broken up. Soon after the show’s opening, Martin Luther King, Jr. attended the show and admired its message, citing this song as his favorite. 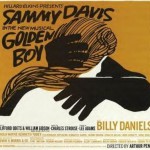 No More
from Golden Boy
Music by Charles Strouse
Lyrics by Lee Adams
Premiere: October 20, 1964
[audio:https://s3.wasabisys.com/selfagency-host/jewschool.com/14-no-more.mp3] Buy the CD! | Buy the MP3!
In his recent autobiography, Put on a Happy Face, Strouse recalled the difficulties involved in putting on this production and working with a star of Davis’s caliber. For instance, Davis’s contract gave him approval over every single song in the score, quite an unusual agreement for a Broadway production. Since Davis was performing a blockbuster club act in Vegas at the time, this meant lots of flying back and forth between New York and Vegas for the songwriters who had to audition new songs for the star at three in the morning following his “midnight matinees.”
Sammy’s only previous Broadway outing had been Mr. Wonderful, which was essentially Sammy’s club act placed within the slightest of stories. So being part of a collaborative process for the good of the dramatic work as a whole must have been new to him. Strouse wrote:

Lee and I didn’t write the pop-style, Sammy Cahn-Jimmy Van Heusen songs that Sammy could metamorphose into jazz-sounding phrases, and Sammy wouldn’t/couldn’t/didn’t want to sing our versions of “black.”

Strouse explains at great length in his book that much of the tension between himself and Davis really revolved around Davis’ desire to swing the score in opposition to the composer’s desire to hear the score sung as written. Because jazz singing was still so closely associated with being black, Strouse fretted that his musical proclivities were being misinterpreted. He wrote:

Lee and I had wanted to write a musical true to the pain, hopes, and culture of African Americans. So, naturally, everyone involved in the writing was white and Jewish–except for Sammy, who was only Jewish… Race relations played out behind the scenes as well as on the stage. For example, if I was drinking a Coke, Sammy liked to take a sip from the same glass. He confided in me that it was really a test to see whether I liked black people. He never told me whether I passed.

Strouse and Davis eventually bonded when they traveled to Selma together for the famous march. But knowing now the way that Strouse perceived what was going on behind the scenes, it’s hard to imagine the moment when he and Lee Adams first presented this song to Davis, asking him to sing lines like “I ain’t your slave no more.”
If you’re interested in learning about a Jewish organization working on fostering a Jewish community that brings together all Jews, whether they look like Charles Strouse or Sammy Davis, Jr., check out Be’chol Lashon. As they put it in their vision statement,

Imagine a new global Judaism that transcends differences in geography, ethnicity, class, race, ritual practice, and beliefs. Discussions about “who-is-a-real-Jew” will be replaced with celebration of the rich, multi-dimensional character of the Jewish people.

That’s a vision I can certainly get behind.

Tear the Roof Off the Sukkah

Why I (still) support J Street