There may be nothing new under the sun, but there’s plenty new (and old, but new to me) under the sukah this year.
Sukot Goyim (like a Shabos Goy?)
In Israel, it seems a gazillion Christian headed to Ein Gedi to fulfill a prophecy about goyim observing Sukot.

Around 4,000 gathered on the moonlit beach of Ein Gedi to worship “the God of Abraham, Isaac and Jacob” and to fulfill an ancient Hebrew prophesy penned more than 2,500 years ago by the prophet Zecharia, which they say predicts that people from every nation will someday join hands with Jews to celebrate Succot.

That full story is at JPost. Thanks to Relgion and State in Israel for pointing this one out.
Sleeping under the Sukah–In jail
For the first time this year, religious convicts in Israel will be allowed to sleep in a sukah during Sukot.

…for the first time ever, the Israel Prison Service will allow religious prisoners to sleep in a sukkah during the holiday. Until now, the Israel Prison Service has permitted prisoners in the special wing for observant Jews at the Ma’asiyahu Prison to eat in a sukkah erected in the prison courtyard. The prisoners have always been more closely guarded while sitting in the sukkah than they are when confined to their cells, and no prisoner has ever been allowed to sleep in the sukkah.

This important news pointed out again by jblog Religion ans State in Israel. The full story is at some website called Etrog.
A secular Sukah?
Citizens of fancy Tel Aviv neighborhood Ramat Aviv will be living it up this Sukot in their secular sukah.

The secular sukkahs feature activities such as singing in public – a favorite Israeli pastime – under the guidance of singer Revital Friedman; therapeutic workshops by Noya Tzuk, who practices Reiki and self-awareness techniques (participants are requested to bring their own towels); and a special workshop for Hoshana Raba, the seventh day of Sukkot, called “Sweet Skewers” – in which, a flyer promises, “we will learn to design a pretty and tasty skewer of sweets.”

That’s from Religion and State in Israel, with the complete article at Arutz Sheva.
Sukot with the Samaritans

This is by no means new, but it’s new to me. The Jew-ish Samaritans apparently build elaborate sukot out of fruit and keep them inside.

In the village of Kiryat Luza on Mount Gerizim near the West Bank city of Nablus, the Samaritan priest and Director of Samaritan’s Museum Husney W. Kohen and his family have built theirin-door Sukkah (Tabernacles) with fruits of the holy land. Kohen said the sukkah was built to recall the same Tabernacle build by ancient Israelites after they left Sinai Desert in Egypt 3,500 years ago.

As pointed out by the JTA Telegraph. Full story at Xinhua News Agency, of all things.
Drive-Through McSukah

If you’re in the Miami area and you need to grab quick moment in the sukah, stop by the drive-through sukah!

Jews can now motor into a temporary sukkah, a tent in the parking lot of Pinecrest’s Bet Shira Congregation, for a few minutes to pray, enjoy nature and get a bite to eat. Starting Friday at sundown, when the harvest festival holiday of Sukkot begins, Jews can visit its “McBet Shira Sukkah” — a makeshift wooden shell decorated with palm fronds and offering open views of the sky. It is situated in the middle of the temple’s parking lot at 7500 SW 120th St.

Full article at the Miami Herald.
A Slim, Urban Sukah 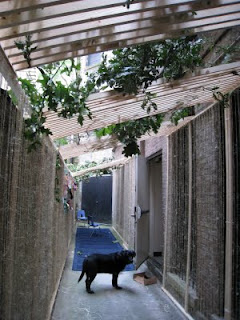 I’m always amazed at the sight of a sukah in a heavily urban area. Rabbi Andy Bachman recently posted pictures of the sukah at Congregation Beth Elohim in Brooklyn. Their sukah is a marvel of urban sukah engineering. It’s big, but looks very long and skinny, made to fit in a little alleyway.
Sukot on the Move

I previously blogged about a mobile sukah concept here. There’s also this. Meanwhile, Chabad has an 18-wheeler with a sukah on the back traipsing around New York City and, according to Tablet,

Enterprising 16-year-old yeshiva student Levi Duchman has affixed a mini-sukkah to a pedicab and has been biking around Brooklyn bringing the mitzvah to the people. (Chabad’s website, which published a report on the project, may have been confused by more traditional stories of Jews in New York—its article uses the word “peddling” instead of “pedaling” throughout.)

Full story here.
Anybody seen any other Sukot mishegaas?

Confessions of an election junkie