Between services this Yom Kippur, I attended a talk by a revered and learned elder in my community. Michael had a number of urgent messages to share with us that day. One of them was that the biblical story of Job never actually happened. “The Job story never happened. They say so in the Talmud.” Here was a righteous man, who happened to be a Holocaust survivor, feeling the need to tell us, on Yom Kippur of all days, that the Job narrative was nothing more than a fiction with an abstract moral. He did not explain why he chose to speak of this particular subject, but it seemed as though he wished to assure us that no life could be as unbearable as Job’s.

The next week, I saw the opening of the Coen brothers’ new film A Serious Man, set in 1960s Minnesota, with many scenes filmed at our congregation in St. Louis Park, MN. Seeing Michael, in his distinct, heavy Czechoslovakian accent, call the protagonist’s young son up to the Torah in the film’s climactic bar mitzvah scene caused me to view A Serious Man in an entirely different light. I began to consider the possibility that this film, centering on the multiplying woes of an earnest, unassuming suburban Jewish mathematics professor, was a modern re-casting of the Job narrative. Both in his personal life, which included his wife’s sudden announcement that she wanted a divorce, his children’s apathy, his neighbor’s hostility, and in his professional life, where his travails included the shocking attempt of a student bribe him for a passing grade and the frustrating uncertainty of his department’s tenure review committee’s decision, Larry, his glasses eternally askew and his life a mess, is beset with anxiety and ethical crises brought on by harsh and seemingly random circumstance. Larry’s troubles are decidedly modern problems, but the questions he asks are timeless. (Curiously, Michael – my fellow congregant who appeared in this film — was the only character in the modern American part of the film–which constitutes the bulk of the film’s narrative–to speak with even a trace of an old-world accent.) The Yiddish of the opening scene gives way to an affectively flat English which dominates the heart of the film. Only in this bizarre bar mitzvah scene are we reminded of that world, for a fleeting moment.
This understated but extremely ambitious films tackles the formidably expansive subject of human suffering, but framed within a very specific moment of Jewish life in America.
Formatted like a Talmudic discussion, the film opens with a piece of visual aggadah, a symbolic prefatory anecdote, a distinctly theatrical and subtly witty Polish shtetl scene, which could have come straight from the pages of Yiddish modernist writer Sholem Asch. While the Yiddish accent of the wife in this scene was a bit off, gestural richness abounded, amply compensating for any such technical shortcomings. The dybbuk character was portrayed masterfully by Fyvush Finkel, whose facial contortions alone were enough to recall the communal soul of a people of a bygone era. This was a world inhabited by spirits, talismans, premonitions, and acceptance of harsh fates.

Following this mysterious opening scene, the film cuts to a quotation of an earlier commentator (an epigraph from the venerated medieval biblical and Talmud commentator Rashi), only to be followed by the meat of the matter: a seemingly discontinuous flow of overlapping ethical questions and conceptual impasses with material consequence (i.e. the story of professor Larry Gopnik circa late sixties Minnesota). This seemingly abrupt leap from old-world to new-world, from Yiddish to English, from Lublin to Minneapolis, is reflected on many levels within the film, as the very structure of belief changes radically from superstitious folk-belief to wary, modern skepticism.
And how does it all resolve? Teiku (this is the English transliteration)= the acronym for Tishbi Yetaretz Kushiyot V’ba’ayot: The Tishbiite prophet Elijah will have to answer and resolve these questions. (This is the famous Talmudic phrase found at the end of long stretches of disputations that cannot be resolved.) In other words, like in many Talmudic disputes, the questions here remain unanswered.
Indeed, the age-old practice of argumentation and questioning in the Jewish intellectual tradition is not only an avocation here, it is, on more levels than one, the vocation of the curiously flat figures portrayed in A Serious Man. In this web of questions, the characters are somehow lost and cede any real sense of agency. In this way, the people on-screen are relegated to the same passive ‘learning’ status as the spectators in the viewing audience. The story (for lack of a better word) we see unfolding onscreen is a lesson for everyone. But when can the learner become a teacher? When do we cease to become mere objects of circumstance and begin to take action? In A Serious Man, the answer, it would seem, is never.
We first encounter Larry in the context of his doctor’s appointment. There is something decidedly mechanical and morbid about the way the doctor examines him against a backdrop of flat lighting and the pallid décor of the check-up room. Through a series of abruptly edited flashes, the viewing audience catches glimpses of Larry’s middle-aged body on the examination table. His body becomes a symptom. Life is the sickness.
The scene is cross-cut with a scene of his adolescent son Danny, absorbed in the “other world” that his headphones grant him, as he sits passively, hoping not to be noticed, in Hebrew school. The old Hebrew school teacher rambles on in the background, reviewing the present and past tense conjugation in Hebrew of a sentence that begins in the singular, “I am going home” (ani holekh ha’bayitah…). Following the recitation of this grammatical review, the teacher prompts the students to answer basic questions in Hebrew. At the close of the scene (and the Coen brothers are nothing if not masters of comedic timing), the teacher concludes by asking the students, “ha’im anakhnu omdim? Lo. Ha’im anakhnu holkhim? Lo. Anakhnu lomdim” (Are we standing? Are we walking? No, we are learning). 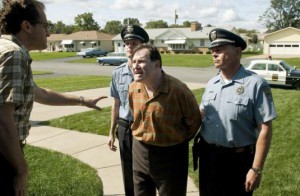 Filmgoers seeking charismatic on-screen personalities need not see this film. The characters here reflect the Old Testament tradition of ‘man in the negative.’ The choreography of circumstance and elusive will of God trump any individual personality trait. Many of the archetypal male ‘heroes’ of the bible are cast in this light (think about Noah, Isaac, Job, etc.). We do not gain much insight into their actual personal qualities, but rather, what befalls them. What they did not do. Similarly here, characters are not so much developing personalities as they are embodiments, almost in a Brechtian Lehrstücke sense. The recurring line of this film–the mantra of inaction–is: “I/we didn’t do anything!” whether it be Larry reflecting on the sudden dissolution of his marriage, Larry’s hapless brother protesting his arrest, or Larry speaking defensively on the other end of a phone line to the Columbia records salesperson (“I never ordered Santana Abraxas, I never listened to Santana Abraxis!”). In each case, the statement responds to a unjust and absurd, yet seemingly inescapable situation. All “action” is deferred to the dream sequences interspersed throughout the film.
While the film’s unusual acting and plot-less plot might have defied standard narrational expectations and frustrated critics and viewers alike, there was something hauntingly, unspeakably real about this film. Some images may have been just too grotesque (e.g. the preponderance of close-ups, revealing less than appetizing facial detail), while other scenes may have seemed too pristine (e.g. the unremittingly bleak, flat surfaces of suburbia: perfectly manicured, identical lawns, not a cloud in the sky, nary a tree on the street–a painfully placid colour-palette, reflecting the atomistic nature of suburban professional life), and the characters may have seemed too flat (as some critics have observed). The Coen brothers, however, engage in a different kind of realism, a terrifyingly resonant one.

AJWS Rabbinical Students' Delegation – with you on it?

Four Glasses of Wine in Ritual, Action, and Values