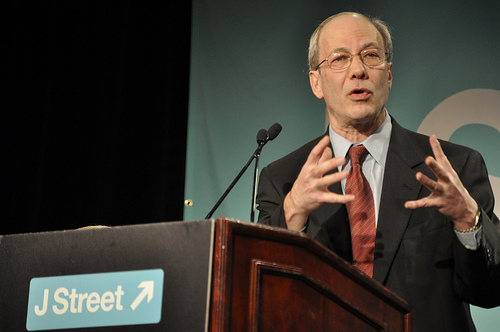 I suspect we direct our most bruised anger at those most likely to be our supporters…who don’t. That “self-hater” is such a cutting insult is part and parcel of that emotion. And it’s why it’s taken me a couple days to come down from the anger I felt towards Rabbi Eric Yoffie following his speech at J Street.
On Tuesday, he spoke strongly and provocatively. He did not shy from controversy and never wavered. He has the prophetic instinct to make himself unwelcome in his own house, which I support and commend. It’s a talent I value, admire and aspire to. Kol hakavod to him.
Most of his speech was right on the money, leading me to applaud many times, but two moments left me seething, ready to verbally skewer him and decry him as a traitor. Thanks to Noam Shelef of Americans for Peace Now, I now have a term for my eagerness to briefly disown Yoffie: the narcissism of small differences. I have since cooled off my anger and I wish to give Yoffie a second chance.
It began when Yoffie had just finished recounting the dire straights of Sderot children. Did he presume to lecture us on Israeli suffering? Or perhaps hoping by storytelling would align our sympathies only with Jewish blood rather than balancing it with Gazan strangulation? He seemed to justify in entirety Operation Cast Lead, without any mention of the negotiations which Israel abandoned, without any discussion of proportion. He drew no alternative — ironic for the head of movement founded on alternative interpretations — except crushing force and did it by omitting huge factors under debate. I expected more from a man of his prophetic talent.
But it was following Ben-Ami’s mellow response that I felt Yoffie slammed the door on his own prophecy, when Rabbi Ellen Lippman posed a question. Putting aside the charges of anti-Israel bias at the UN, she asked, “what will you do to further human rights in the region?” Yoffie’s position on the Goldstone report was already clear, having already berated Goldstone’s person at some length, when Rabbi Lippman handed him this opportunity to still affirm his commitment to human rights. Essentially, is there room in supporting Israel for supporting human rights in Israel, for both Israelis and Palestinians? Can we agree that Israel is not perfect and that we must investigate our abuses?
He ignored her question entirely. Worse yet, he returned to his impassioned diatribes against Goldstone. It was watching Yoffie talk and talk about Goldstone and let Rabbi Lippman’s question linger and linger until, at end, it went unanswered which made me yell at the screen in the overflow room, “Answer the question!” Scattered applause met my outburst.
Jeremy Ben-Ami’s response to Lippman was too light, by far. No Jewish press so far noted that the largest moment of disapproval for Yoffie was not the scattered boos but the resounding applause to Ben-Ami’s backhanded rebuke to Yoffie: The Goldstone report is not an excuse to ignore the mistakes of Operation Cast Lead.
I was hoping to see in Yoffie a similar relationship to Israel, yet all I saw was the behavior that disgusts me so much about the older generations. The charges of anti-Semites are too exciting to leave and let be, it seems. Yoffie preferred to fuel our sense of oppression, victimhood and unfairness than to deal with the root of the problem. Instead of an enlightened thinker, Yoffie represented at that moment the hallmark of all that I am very happy my generation is leaving behind. My eagerness to see his generation grow old and pass away was embarassingly palpable.
In a more extreme articulation: between human rights and Israel, Yoffie said the most important was Israel. My answer will always be human rights. As Matt Yglesias said the next morning, “I am not into fascism. I’m not about to endorse a Jewish dictatorship,” and that there is no pro-Israel unless it includes pro-peace and pro-democracy. Not only are human values more important, but you will not long have a Jewish state without them.
I am not sorry that Rabbi Eric Yoffie, a good man and visionary by all accounts, served as the conference’s lightning rod. He accepted the post willingly and spoke his words accordingly. Yet even as the narcissim of small differences makes us impassioned to fight bitterly over nuance, he should know that he cannot ignore wholesale Rabbi Ellen Lippman’s question. While I absolutely do not wish him personal ill, I would like to give him a chance to answer her question again.
So I ask Rabbi Eric Yoffie here to answer clearly and unequivocally where our obligation to human rights intersects with our relationship to Israel. You can always redeem in our eyes your leadership and worldview. I do not assume that you will frame your answer in the terms or contexts of my generation — but I at least expect an answer.
You can also thank him for coming and give him a polite nudge about responding to us.
Photo courtesy of Dan Sieradski’s awesome flickr feed.

Asleep at the Wheel