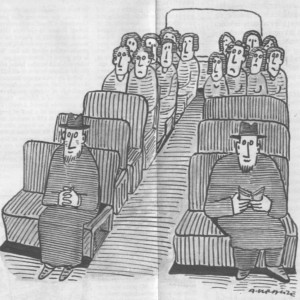 Women arrested at the Kotel is not the only battle over basic women’s rights and religious freedoms in Israel this season:
By December 27, Transportation Minister Yisrael Katz of Likud must endorse or turn down his committee’s recommendation to end the “mehadrin” gender-segregated public buses. In support of the many Israeli orthodox women’s and civil rights groups supported by Diaspora Jewry, the New Israel Fund emailed supporters today to urge Katz to desegregate.
The transporation committee found that while the segregation on select bus lines is supposed to be voluntary (women at the back, men at the front), the haredi population “treats them as lines ‘belonging’ to the haredi population.” Haredi groups expect a publicly-funded separate arrangement that contravenes the Basic Laws of freedom of movement and religion, it reported. “This, in turn, led to attempts on their part to force these arrangements on passengers who did not agree to them.” The reports of assaulted women are not pretty.
Women’s rights activists within the haredi and orthodox communities are campaigning Katz to accept the committee’s conclusions. Israeli author Naomi Ragen told JPost that Katz should accept it “so that we know that we are living in a democratic state and not in Iran and Afghanistan.” In a NIF portrait of orthodox women’s activists, Kolech-Religious Women’s Forum activist Zahava Fisher said, “Whether it is Blacks like Rosa Parks being asked to sit at the back of the bus in the US, or women being asked to sit at the back of the bus in Israel, we cannot accept segregation.”
Apparently there is nothing in halakha mandating segregation of men and women in public places. A ruling by Rabbi Moshe Feinstein even permits mixed seating on public transportation and says that any man who experienced erotic contact in such contexts has problems. (Two points to the first reader who can find it online.)
I’m more than a little uncomfortable with the Iran-Afghanistan-Israel parallel, and I have no problem supporting my like-minded bretheren from out here in the Diaspora. So do our sisters in Israel a favor and let Katz know that the mehadrin buses should end. That kind of religion is below Israel’s dignity.
Katz’s email, office phone and fax below the fold.
Contact Transport Minister Katz and ask him to reject public buses with segregated seating:

Sample Email Text
Dear Minister Katz,
Forcing women to sit in the back of public buses contradicts democratic principles, Jewish tradition and universal values of religious and personal freedom.
In the past, Israel has taken many commendable steps to further gender equality, and we call upon you to make the right decision in promoting and defending women’s rights. At the very least, please uphold the recommendations of the Special Committee and insist that no woman ever be coerced into entering or sitting in the back of the bus. Even better, require those who insist on such segregation to provide their own, privately-funded, transportation.
We in the U.S. cannot stand idly by while Israel grants a small minority the power to dictate what Judaism is or to make halacha into an instrument of discrimination and segregation. We hope we can count on you to prove your commitment to equality and Israel’s pluralistic democracy.
Sincerely,
Name
City, State
Country