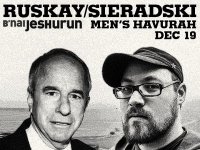 This month’s meeting of the Men’s Havurah at B’nai Jeshurun on December 19th will feature John Ruskay and Daniel Sieradski in a dialogue between the establishment and anti-establishment voices in the Jewish world today. Where are we? What’s needed? What are the generational divides?
John is the Executive Vice President and CEO of UJA-Federation of New York. Daniel was the founding publisher and editor-in-chief of Jewschool as well as blogs Radical Torah and Orthodox Anarchist.
This program will also include davening, schnappsing and socializing. For men only. For more information contact Naomi Goodhart: [email protected]. Saturday, December 19th, 5 pm – 7 pm, in Frankel Hall at the 88th Street shul. (Facebook event here.)

On Teshuva: Recognizing Jews who converted to Catholicism