It is so wonderful to be on the idyllic central California coast with 630+ people all interested in discussing the relationship between issues of food justice, nutrition, and the environment, and how it relates to the Jewish community. The participants here represent 5 countries, 29 states in the US, come from all sorts of backgrounds and identities, and are all here to forge community for the next three days.
The breathtaking drive from Los Angeles to Monterey distracted me to the point that I was not able to make it to the conference center in time for the afternoon sessions that kicked off the conference, so below is a write-up of this evening’s events.
As this is a Jewish food conference, we were treated this Christmas Eve to Chinese food and movies. While there were amazing movies to choose from, I chose to go with a documentary on the Jewish community of Petaluma, CA called “A Home on the Range,” which was directed and produced by Bonnie Burt and Judy Montell.
Before the movie began, we were shown two short films. The first featured the travels and exploits of the Jewish Climate Change Campaign and their topsy-turvy veggie-oil fueled bus. 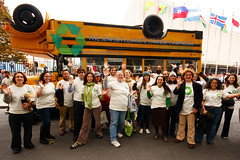 This is a particularly nice story that just has to make you smile. To paraphrase Pesach, one of the members of the bus tour, here is a group of best friends who get to have a sleepover every night and travel the country teaching youth about climate change and resource use. Say what you will about poncho-donning, patchouli-scented hairy Yidden, but these folks are rocking out some amazing work and inspiring youth to rethink their relationship to the earth.
The second short, “Song of the Jewish Cowboy,” featured the touching story of Scott Gerber, a real life, flesh and blood Jewish cowboy (maybe the last?) who is a descendant of the Jewish community in Petaluma, CA, which built a shtetl in Northern California and became a whole community of Jewish chicken ranchers.
The tale of the Jewish community of Petaluma is really a perfect microcosm of the Jewish communities of America as they have evolved from the end of the 19th century to the beginning of the 21st. This small town of around 5000 in the 1920s became home to hundreds of Jewish immigrants between the 19th century and the post-WWII period. As the community grew more diverse, it was rocked by tensions between socialists, communists, Zionists and religious Jews. The movie features interviews with the children of the ranchers, who were born and raised in Petaluma and saw the end of a tight-knit, self-sufficient Jewish community in Northern California, and heralds the rise and fall of the local Jewish Community Center, which at one time managed to house both the local Workmens’ Circle and the shul. Today, there is a small Jewish community of under 200 in the town, none of whom are chicken farmers.
This film struck me as a commentary on the transition from Jewish Americans to American Jews. As one of the interviewed stated, it’s both positive and negative, because while the shtetlnik nature of the community was lost, her children were included in the greater community, whereas in the earlier generations, this was not the case. But such acknowledgement must be bittersweet when one sees the power of community and the joy in the memories of those who were part of this fascinating community of Jewish immigrant chicken farmers. If you have the chance to see the film, “Home on the Range,” it comes highly recommended.
As I write it brings a smile to my face to see strangers meeting strangers who otherwise may never have had the opportunity to meet, today are not just forging new relationships but also are engaging in dialogue on important issues that affect the entire globe in a pluralist, accepting, inclusive setting (that happens to be AMAZINGLY beautiful, and the more I write the less time I have for moonlight starry beach walks).
Check back in tomorrow for a pre-Shabbos post (bli neder, if possible) and again for a post-Shabbos post (most definitely). Unfortunately I have to leave the conference early Sunday morning, so look for a guest blogger to cover the final day of the conference.

It Starts Right Now: A Punk/Hip-Hop/Indie Playlist for the Chagim