I do not hate orthodox believers. I do not hate Orthodox Judaism. I do not hate the haredi or their Judaism either. I like and dislike them as much as I dislike orthodoxy (lower case “o”) in any stream of Judaism, including Reform and Conservative and (yes even!) havurah hippyness. Which I think is why the vociferous, self-contradictory and abusive comments left by self-identified Orthodox Jews on Eli Valley’s latest comic at The Forward are missing the point. Then again, those commentors always miss the point.
Extremists are bad for Judaism. But the romanticization of those extremists — meaning views that put them at the top of the Jewish authenticity scale — is like admiring Islamic extremists for their “authenticity.” The vastness of religion is always shamed by a minority who will excuse their human desires through theology. Women are barred from leadership and study. Xenophobia is granted a divine rubber stamp. Social contract obligations are ignored. The rule of law is disregarded. I would think we can all agree on this.
Which is why I think anybody should be able read Eli Valley’s comic and see the truth of it without going berserk. No where does Eli say all Orthodox Jews are like this. If you feel defensive, then I recommend a particular course of action: speak up not to Eli but the speakers whose words are quoted. (Citations are here.) But the speakers of these words are not kicked out of communal leadership, shunned or defunded. In fact, quite the opposite.
If these speakers had no authority or little influence, they would remain our crazy uncle. But in Israel, the haredim control the Official Stamp of Judaism. And the Modern Orthodox bloc is the home camp of the settlers. And in America, as Eli rightly points out, starry-eyed and naive Jews leave a boring Judaism for another Judaism that at least has a mission. Because of this, we need to (and are) pulling down the boring Judaism and building something better. But we also need to point out that authenticity is a sham. And that evil is evil, especially if it’s authentic evil. 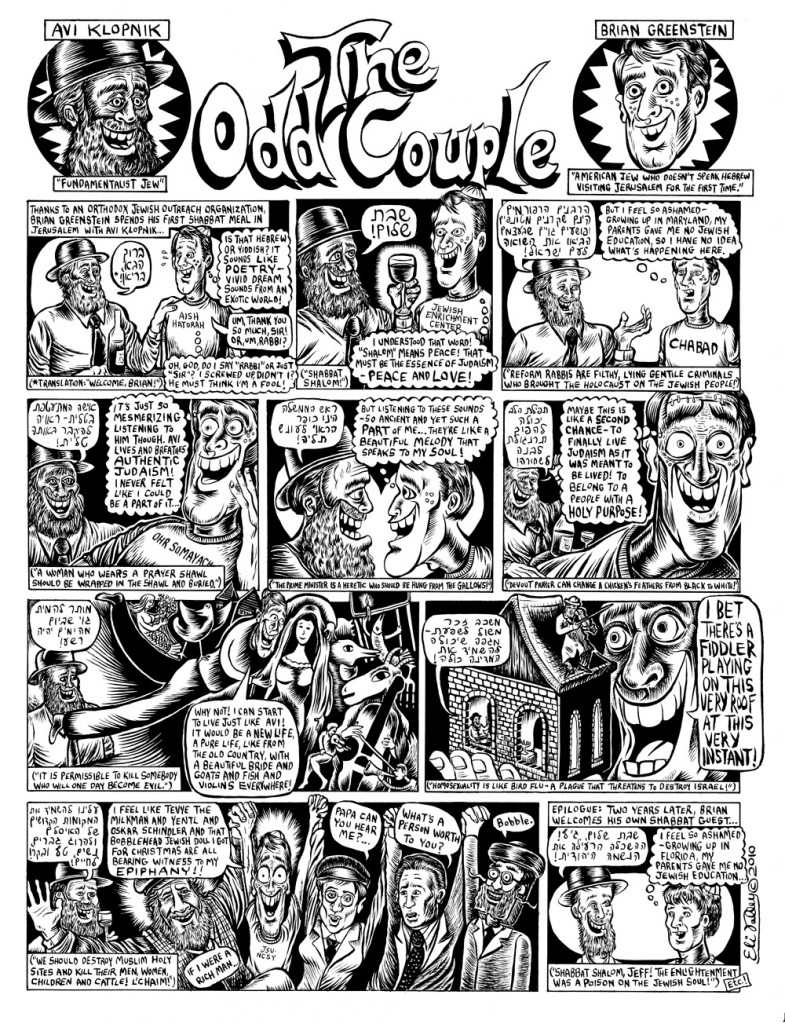 Reflections on Boston and Dizengoff Center (Ode to PTSD)

Iran to Back PA