Editor’s note: The following is a guest post by Dvora Meyers. She usually blogs at Unorthodox Gymnastics. 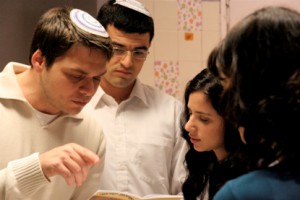 I saw Srugim for the first time over the summer. Ever since then I’ve been hooked on the Israeli television show that follows the romantic travails of four Modern Orthodox singles in Katamon, Jerusalem’s equivalent of the Upper West Side, as they search for partners and meals on Shabbat.
Since the program does not air on any channel in the U.S., I was forced to download it illegally on the Internet thus opening my computer up to a whole host of viral threats. But it was definitely worth it.
Apparently, I am not alone in my fandom. The [spoil alert]Jewish Week has just run this cover story about the show’s popularity stateside. The show has just begun its second season in Israel (and on my computer in Brooklyn). If you’d like to watch it without endangering your hard drive, the JCC in Manhattan (in conjunction with Jewschool) will be screening the first season (two episodes a week) starting Wednesday, Feb. 3 at 7:30pm.
In addition to being entertained, it’s the perfect opportunity to sharpen your Hebrew comprehension skills. Or if you are seated next to a particularly cute man/woman, you can pretend to not understand what’s transpiring on-screen and ask for help. I’m sure that the show’s characters would approve. Or you can tally the number of halachic inaccuracies you can find throughout the two episodes. Sounds like a good idea for a drinking game to me… Though I suppose the alcohol part will have to wait ’til afterwards, when the Jewschool crew heads next door to Amsterdam Alehouse. Join us! Bloggers and readers alike will be toasting pints and sipping cocktails in the back party room.
SRUGIM COCKTAIL CONTEST: We’re taking suggestions for drink specials in the comments field of this post. The only rule is that you must include the name of the drink, its ingredients, and, of course, the name of the drink must be related to a character, place or theme of the show. The top three favorites will be served at the Jewschool after party on Wed. Feb. 3 – and those three lucky winners will suck down their first drink on Jewschool. RSVP on Facebook now!

Things that make you go, hmm…