The state of Israeli civil rights alarms me. Since my last update on the damage Bibi Netanyahu’s goalitzia is doing to civil rights in Israel, the country has offered us only a field hospital in Haiti to stem deepening concern. Since that post, the government has come for women’s rights activists. Then humanitarian aid workers. Then opposition journalists.  And now civil rights leaders. All in January 2010. As Jewish progressives in Israel and the Diaspora who give a damn about whether Israel is a model society — and who support justice anywhere, everywhere — we’re facing difficult questions. 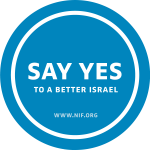 Over 450 people have registered to attend at B’nai Jeshurun (257 W. 88th Street, NYC) and 1,000 for the webcast at www.nif.org/townhall day-of. It’s not going to be another BJ celebrity deathmatch — more like four brilliant thinkers with positive visions of a better Israel.

I was a medic in Charlottesville

You just can't lock down the people of the book