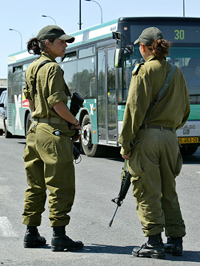 Women are largely prohibited from serving in combat units in the IDF, though they are ubiquitous as medics, scouts, officers, education officers, social workers, and more. Even still, women soldiers have increasingly been combatants over the past few years (see picture).
Yet most day-to-day work related to policing and securing the occupation is not ostensibly combat-related — so why are female soldier voices so few? Even among voices of conscience, female voices are rarely heard. Sometimes women soldiers are privy to the worst of human rights abuses by men — and yet remain silent still. Why?
Breaking the Silence is changing that with a new booklet of women’s testimonies and a cross-country mission to the American Jewish community this month. Dana Golan is bringing their first-ever women-only testimonies to America as the organization strives to educate the American Jewish public on what “occupation” entails.
Their first woman CEO, former Border Police officer Dana Golan, explains:

“Israeli society does not want to think about our girlfriends, daughters and sisters taking an active role in carrying out the ‘occupation,’ just like the male soldiers. We want to believe that the female soldiers stationed in the territories are not as aggressive and that they do not get their hands dirty.”

She explains women feel it is not their place to out their peers, and the pressure to be “one of the guys” often begs them to be more harsh than their male counterparts.
Breaking the Silence is one of Israel’s most important — and hard to hear — contributors to the debate around the conflict. Neither heroes nor villains, they say, Israeli soldiers are young people put in impossible situations. I highly encourage you to attend these humanizing (de-hero-izing and de-villifying in turn) voices, this time from women of conscience.
Full tour list below the fold. Read more on Ynet and CommonDreams.
Friday, February 19, 2010
12:30PM – NYU, Richard Ettinghausen Library, 50 Washington Square South.
Saturday, February 20, 2010
7:00PM – Columbia-Barnard Hillel: the Kraft Center for Jewish Life, 606 West 115th Street (between Broadway and Riverside Drive). Sponsored by New Israel Fund’s New Generations, RSVP here.

A Jewish State in Weimar?