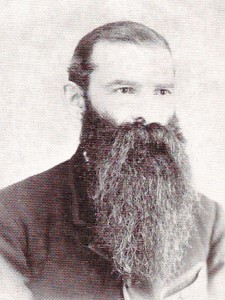 The picture to the right is of Polish-Jewish Socialist Sigismund Danielewicz, an early 20th century organizer and founder of the California Sailor’s Union. He was the lone opposer of the exclusion of Chinese from Pacific labor unions. He was opposed virulently by the San Francisco Jewish establishment and was last seen in 1910 heading back, on foot, to the East.
The San Francisco Jewish scene has long been at the corroded fault-line of established Jewish communal politics and a fresh, rebellious underground cadre of Jewish culture workers. We’ve got Jews on the far left, and some of them keep Shabbos. We’ve got exceedingly experimental forms of non-traditional Jewish practice – and sometimes I hear Israelis speaking Yiddish in my neighborhood. Today, the Bay Area, which encompasses SF, Berkeley, Oakland, and Palo Alto, and everywhere in between, is a very distinctive and fresh corner of the exile. Here’s a sample of current offerings:

That is right, Jews workin in the verdant, fertile land. I feel all like A.D. Gordon just thinking about it. Blessings from the Bay.

In our mouths and in our hearts: Day 45

This parsha is dreamy