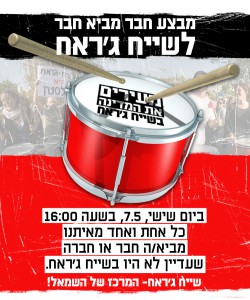 One of the folks on the J Street mission said to me “if it isn’t in the New York Times, it didn’t happen.” Apparently, the Sheikh Jarrah protests are real, now.
An exceprt from Kai Bird’s April 30 op-ed:

Today East Jerusalem exudes the palpable feel of a city occupied by a foreign power. And it is, to an extent — although much of the world doesn’t recognize Israel’s annexation of East Jerusalem, Prime Minister Benjamin Netanyahu refuses to halt the construction of new housing units for Jewish Israelis in the Arab neighborhoods. “Jerusalem is not a settlement,” he recently told an audience in Washington.
Not all Israelis agree with this policy. For over a year, hundreds, sometimes thousands, of Israelis and Palestinians have been gathering in Sheik Jarrah on Fridays to protest the expulsion of Palestinians from their homes. Israeli courts have deemed these nonviolent demonstrations to be legal, but this has not stopped the police from arresting protesters.
In a cruel historical twist, nearly all of the Palestinians evicted from their homes in Sheik Jarrah in the last year-and-a-half were originally expelled in 1948 from their homes in the West Jerusalem neighborhood of Talbieh. In the wake of the Six-Day War, Israeli courts ruled that some of the houses these Palestinian refugees have lived in since 1948 are actually legally owned by Jewish Israelis, who have claims dating from before Israel’s founding.

Full story here.
I’ll be out of town this weekend, but if you’re in J-town, you should go.

Gaza conflict: Who is a civilian?