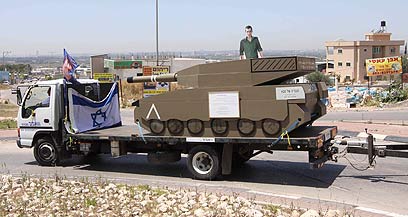 I’m squirming in both mirth and discomfort at this well-intentioned attempt to raise political pressure for the release of Gilad Shalit from Arab citizens of Israel. The concept: station a big, wooden tank with Shalit’s visage and a copy of the captured soldier’s statement. The station it outside a village wherein 48 Arab citizens were massacred in 1956 by the IDF.
The bark of awful, embarassed poor execution nearly killed me. But perhaps what’s surprising to me is that this initiative comes from a citizen’s group called the Candle for Peace and Harmony, which proposes a prisoner swap. Founder Malik Faraj said said in Ynet, “We are citizens of this country – we must act to free Gilad freed because he is our brother,” he said. “We have the support of the majority of Israel’s Arabs. We have no faith in the politicians. A referendum is needed to determine the price (number of Palestinian prisoners) for Shalit’s release,” he added.
Laudable. In fact, this is right and just to honor Israel’s Arab citizens as fully concerned citizens, instead of assuming they’re a traitorous fifth column. Shared national identity between Jewish and non-Jewish citizens is in short supply. Not a single Arab political party has ever been in a governing coalition, the state symbols and anthem are entirely Jewish, and the Israeli Knesset these days keeps trying to strip Arabs of their rights. And there is success to crow about: the mayor vouched unequivically for bringing Shalit home. So this is spot on.
Except for that tank part. Doh.

The Further Adventures of the Fantastic Flotilla!