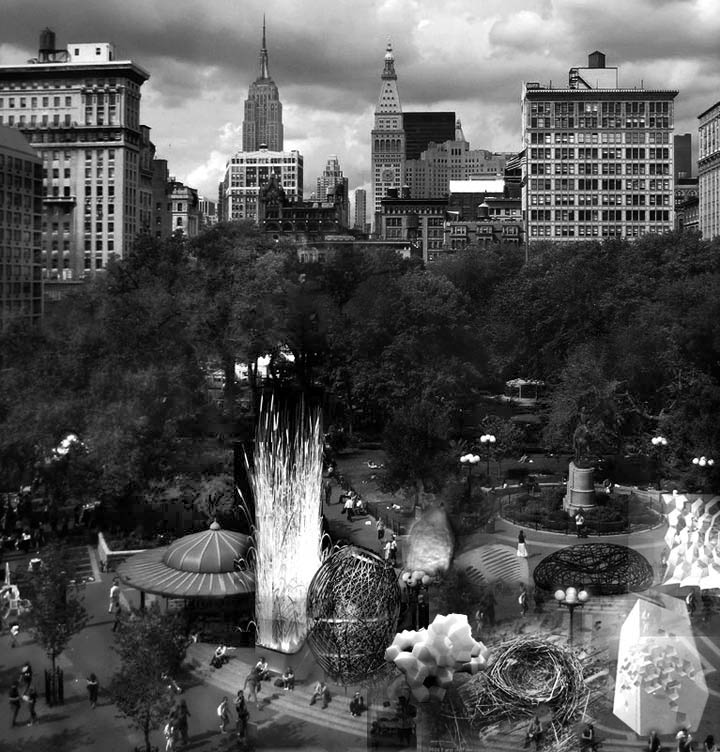 It may seem a little early for a Sukot post, but the deadline is fast approaching to enter your bizarre modern version of the sukah in the Sukkah City: NYC 2010 exhibition. Apparently, if your design is selected, you get to build a weird sukah in Union Square.
Their elevator pitch:

12 radically temporary structures will be built in Union Square Park in New York City. Funded by us. Designed and built by you.
Register by July 1, enter by August 1, installed September 19-21.

From The Architect’s Newspaper:

Hoping to challenge not only New Yorkers’ notions about sukkahs but also the world’s, Joshua Foer has launched Sukkah City for this coming Sukkot. From September 19–21, a dozen experimental sukkahs will be constructed in Union Square Park, created by what Foer anticipates will be a mix of the world’s foremost architects and artists, though the competition is open to anyone, goyim included. “The idea is to take this ancient architectural identity and reinvent it and really see what we can do with it, to really push the boundaries,” Foer said.
For millennia, sukkahs have looked about the same. Three walls of varying dimensions and orientations with a roof made of organic matter—palm fronds, sugarcane, or cornhusks are among the common foliage—where more sky is visible than roof. A place of hospitality and reflection, it exists for just eight days. And it is within these relatively strict yet open-ended constraints that Foer and his partner on the project, critic Thomas de Monchaux, hope entrants will explore.
“Design is the search for constraints, so I think our expectation is that different designers will zero in on different aspects of the sukkah to produce something we’ve never seen before,” de Monchaux said. “We’re really hoping for a radicalized reaction to each of the constraints, though if someone wants to take them all on, we welcome that, too.”

Check out their slick site here. There, you can read about all of the laws of the sukah. Most are halachic. One is municipal:

There is no maximum area, except in NYC where any structure larger than 19 x 8 feet is not considered temporary by DOB.

PS. Did you know that you can use a whale or an elephant as one side of your sukah?

The Sad State of Tefilah in America