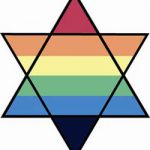 On June 1st, queer Jewish spirituality outfit Nehirim and NUJLS (the National Union of Jewish LGBTIQQ Students) announced that they were going to merge, becoming one outfit–eventually named Nehirim, with a new Director of Student Programming and Student Programming Advisory Board created to help carry out NUJLS’ mission.
Yesterday, it was announced that the Denver-based Jewish Mosaic: The National Center for Sexual and Gender Diversity was going to merge with the Boston area’s Keshet.
There are some obvious pros to all this queer Jewish convergence: one larger org is able to do more and have a stronger voice than a number of smaller orgs, there are ways to streamline administrative costs and hassles, and it’s much more effective from a fundraising point of view to not have a number of organizations with similar missions competing for dollars–you’ll note that the Schusterman Family Foundation makes an appearance on both press releases, for example. Of course, there are a lot of ways to merge clumsily and at the expense of important parts of an org’s mission–let’s hope no major errors are made on that front–and hopefully there’ll be enough space for each of the visionaries involved to continue to tear it up at the appropriate level. Only time will tell.

So Much LGBTQ Jew News!

In our mouths and in our hearts: Day 15