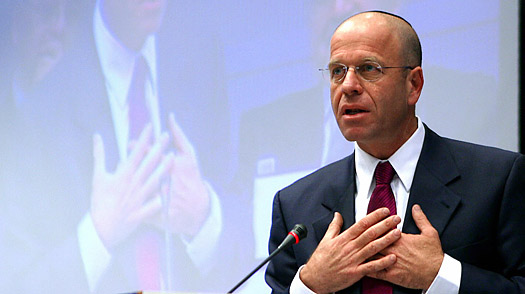 Avraham Burg, one-time Speaker of Knesset and renegade political royalty, has done what all successful (and/or out of power) politicians in Israel do: started his own party. He outlines a party platform for “Israel Equality” (Shivyon Yisrael) that is eyebrow-raising: a new joint Jewish-Arab party focused on social equality. In a stirring lambast against the aging and boring existing political leadership, he calls for “thorough shake-up”:

A party that will sail far beyond the paradigms of classic Zionism, which to this day ignores the place of Israel’s Arabs. A party that will demand full equality for all Israel’s citizens, the kind of equality we demand for the Jews in the Diaspora wherever they live.
…Those who vote for [Shivyon Yisrael] and its candidates will accept the definition of Israel as “a state whose regime is democratic and egalitarian, and which belongs to all its citizens and communities. The state in which the Jewish people have chosen to renew their sovereignty and where they realize their right to self-determination.”

Some people are really excited about this and I have no dearth of enthusiasm for Burg himself. He’s an accomplished politician raised in the core of Israeli politics who has the balls to say prophetic things that are deeply unpopular to say. (Such as: the Holocaust is over, get over it.) Having met and worked with him, he’s certainly charismatic, politically aggressive, and deeply cares for moving (or pushing) Israel into its next stage of existance.

However, I find myself none too skeptical. My skepticism is rooted in not just the usual frustration with micro-parties but knowledge that there already exists a Jewish-Arab political party focused on social justice: Hadash. At four Knesset seats, it outranks Meretz’s three. Its agenda should generate enthusiasm with nearly every American progressive: pro-union, pro-fair wages, anti-war, pro-civil rights, and a leader on environmental issues, just to name a few.
I had the privilege of meeting Hadash’s top MK Dov Hanin two weeks ago, in which he outlined a party platform that sounded absolutely lovely. In fact, it sounded like a presentation at the New Israel Fund — equality for all, minority rights, shared living between Jews and Arabs, and peace with the Palestinians. Further interesting, Dov Hanin ran in the last Tel Aviv mayoral election and won over 34% of the vote against an incumbent mayor. That’s 34% of Israel’s largest, most liberal city. I’m told if you’re under 35 and solidly pro-peace liberal, then you’re almost certainly a Hadash voter, whereas Meretz is seen as a decade out of date, tired and lackluster. Hanin’s prominence in Knesset, I am told, rose and the broader palatability for his party platform was tested. Surprising perhaps for the soft-spoken man in jeans and blazer chatting with me in the Knesset’s cafeteria between votes.
Burg’s manifesto takes care to differentiate his new party from Hadash, citing “emotional baggage” that makes it difficult to  I think Hadash’s emotional baggage that Burg could be referring to is (a) its leadership is wholly non-mainstream faces, like Dov Hanin, (b) its expressly communist roots, and (c) its solidly anti-war consistency, even against Cast Lead. (It was the only party with Jews to do so from the outset.)
Is Burg riding the test balloon of Hadash’s meager advances and taking those values into broader societal acceptance? I would not characterize the average Israeli with a love of Arabs, nor a desire to share political power with them. Will Hadash find common cause to merge leadership? (I highly doubt.) Or is this more likely to divide the already divided left?
But I am not entirely cynical. That a public figure as large (relatively speaking) as Avraham Burg is building for public consumption what is considered fringe gives me hope for the Israeli political discourse. With the right wing chewing away at the “democratic” in “Jewish and democratic state,” I pray this sparks the shake-up Burg desires. If anything, I hope it improves the conversation here abroad where liberal Diaspora Jews still pin their hopes on Meretz’s deflated balloon. Here in the Diaspora, Burg and Hanin, we’re rooting for you.