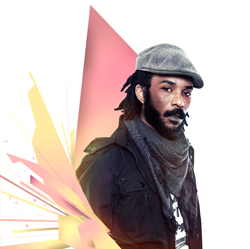 Just in time for our Tu B’Av reflection on Jewish love songs comes a brand-new entry into the field. Y-Love (aka Yitz Jordan) is known as the world’s first African-American Orthodox Jewish hiphop artist, but he’s good enough that you don’t need all those adjectives to sell his music.
He’s also a stand-up guy. We first met at a Jewish conference a few years ago, and I was immediately impressed with his commitment to speaking truth in his music, online right here at Jewschool, and his life, even when his opinions contradict the establishment.
His Tu B’Av song continues in that vein, taking aim at the shidduch (matchmaking) practices of some Orthodox communities. He describes the song, “Second Chance,” as his first foray into ballad territory, but it’s as much a rant and a lament as it is a ballad.
Speaking about the origins of the track, he says, “It’s basically taking my life from 2005-2006, and blowing it up to illustrate a point — people have to be allowed to take more control of their own shidduchim process in the Orthodox communities, and when a person ‘listens to the rabbi,’ well, all decisions have consequences. (Yes I am referring to someone specific in the song. And that’s all the info I’m giving on that subject :))”
You don’t have to be Orthodox or have participated in matchmaking to relate to the song or its message. Click here to download the MP3.

Blogging the Omer, Day 17: The Environment and the Bedouin

The vort for Va'era: Hearing and Redemption