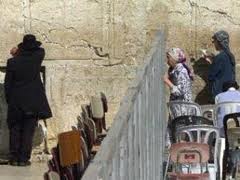 Sometimes I’m so flabbergasted by the news that I can’t even formulate articulate comments of my own.
To wit, this, from Ynet (I have bolded my favorite line of the piece):

The Western Wall Heritage Foundation management has decided to replace the existing partition in the Western Wall plaza, which separates between the women and men’s praying sections, because it does not allow the women worshipers to easily look over to the men’s section.
The foundation received many requests by women who frequent the Wall, claiming that during special celebrations held at the Kotel, such as bar mitzvahs, they are finding it difficult to watch the events through the partition, which is made of iron with small openings, each only a few centimeters wide.
The decision to change the partition was received a long time ago by the foundation management, but was not implemented because they were unable to find a suitable replacement.
One of the solutions suggested by the Western Wall administration was to place one-way mirrors that will enable women to look into the men’s section, similar to the partitions currently in place at the Western Wall tunnels.
After inspecting the area, the administration realized the one-way mirrors lose their effectiveness when they are exposed to the sun, and become visible from both sides.
As a result, the administration decided to examine several other options, including shading the partitions in a manner that will not harm their esthetic look.
Addressing the subject this week, Western Wall Rabbi Shmuel Rabinovich said he was making every effort to replace the partitions in a way that will accommodate the women worshippers on the one hand, and not offend the men worshippers on the other hand. Rabbi Rabinovich noted that he supported the idea of replacing the partitions with one-way mirrors.
“I am advancing the matter due to the obvious need to resolve the existing partition problem. We, the Western Wall administration, will do whatever is needed to enable women who come to the Kotel to watch the daily celebrations, out of a genuine will to improve the visiting experience,” he said.

Heads They Win — Tails We Lose