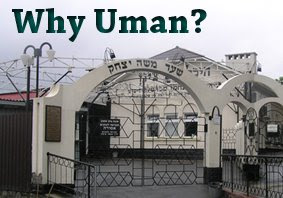 A Jewish visitor to Rebbe Nachman’s grave has been murdered by a local Ukrainian. The murder culminates a series of tense incidents between Jewish participants in the Rosh Hashana Kibbutz and ethnic Ukrainians in the city of Uman, in the Cherkasy region of Ukraine.
Here’s the sad course of events.

So apparently Rebbe Nachman, that holy, wild, achdus and hisboydedus-baal khesed rogue, stopped dancing in his grave. The realization in the English-language press that the annual pilgrimage to the grave of the Breslover Rebbe is also a site of enormous historical, moral and ethnic weight. The relationship between the local Ukrainians and the Jews, on whose money the Ukrainians depend, is fraught with all sorts of muck. Another day in the life of the land that all but Rebbe Nachman’s followers left behind.

BRI NEXT NY up to same old tricks