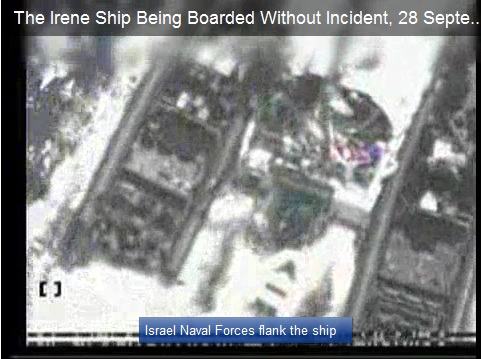 The British catamaran Irene, the “Jewish boat to Gaza,” was diverted to Ashdod without incident and without capturing world attention as during Israel’s boarding of the Turkish Mavi Marmara. This was the second boat following the Marmara to be diverted. Predictions of a media circus failed to bear fruit.
Apparently, the global media is bored of this stunt already. Frankly, I am too. It stinks of pageantry, now that both sides now how the game is played. The boat announces their operating rules, the IDF states its intent to intercept, both sides play nice, and the Gaza blockade goes on. Which is not to say the stunt abjectly failed to raise awareness, nor that the violent prior episode was in any way preferable. (God forbid!)
Pageantry consumes the Israeli-Palestinian conflict. When I volunteered to cover a house demolition in East Jerusalem in late 2004, then too the roles were clear. The family applied for a permit, knowing they’d be denied. The Jerusalem municipality took their fee and considered their application, knowing they didn’t grant permits to Arabs as policy. The family built anyway, knowing the one-room hovel would be demolished. And indeed, the municipality sent over two dozen Border Police along with the demolitions crane, knowing the family would resist. The family called in demonstrators to help them resist, knowing their home would ultimately fall. The police removed the activists non-violently, knowing the press stink that would follow if one were harmed. The demonstration happened; the demolition happened. Everybody knew their role. Pageantry.
It’s an infuriating constant. I am enraged that the state-imposed impoverishment and economic stagnation of 1.5 million Gazans has achieved epic banality. It burns my heart that few in America seem to give a shit either way, pro or con. Unless a protest has a new, creative gimmick, it will be ignored. It’s also a crying shame that the organizers of the flotillas are harmful to and a distraction from the importance of the message. Utter predictability fosters inhumane callousness. “Israel fatigue” turns away so many passionate, progressive and particularly young Jews. We’ve seen these headlines before. It’s the pageantry that kills us.

Pageantry is also a disgusting aspect of our Jewish communal dynamics closer to home. As Netanyahu reveals himself an unsurprising enemy of the peace process — doing what we all knew all along he would do — the American Jewish leadership tries to portray him as a leader for peace. I pray that all across America, Jewish leaders slapped their foreheads in unison as they realized the lines they’d have to regurgitate in his defense. This is my least favorite rerun. And when I see it, I want to change the channel. (Read: I want different Jewish leadership.) Pageantry.
As Peter Beinart just said in The Daily Beast, “So let’s get this straight. When Netanyahu agrees to a settlement moratorium, it’s a sign of his commitment to peace. And now that he has let the moratorium end? It’sstill a sign of his commitment to peace because, as AIPAC now insists, negotiations must proceed without preconditions…To be labeled a champion of peace by the American Jewish establishment, it turns out, a prime minister of Israel only really has to do one thing: be prime minister of Israel.”
There is one way out of the scriptbook and it is not to be found in “awareness” building like the Irene or the Mavi Marmara. Enough people are “aware” already to affect change. These people — you, readers — who know must act. It is certain that at every step, the American Jewish dinosaurs will fight peace tooth and nail. In the press, in Congress, in our community. We don’t need to convince anybody of anything! We need only activate those who already agree with us.
I know that Israel is a downer topic. I know that you’re on too many listservs. I know you care about things other than Israel. I know that your Jewish quota of involvements is full already. But if there were one issue that you, an American Jew, can make a bigger impact than any other social justice cause on earth, it is this one. We need you to be involved.
And as to the headlines recently: I personally don’t care to listen to whiny proclamations by the left that the peace process is doomed. It might be or it might not. If it succeeds, fuckin’ great! If it doesn’t, then why were you sitting on your haunches when you should have been recruiting, building, training and advocating? If you aren’t plugged in somewhere to fight back, or have no advocacy of your own planned, then you play an important, scripted part of this pageant.
Fight the pageant and find your own voice!