Of late, for a variety of reasons, I haven’t gone to my Chicago shul much. Between indie-minyans and leading services for the Jewish elderly, there’s not been much occasion for me to enter the institutions into which I purportedly refuse to set foot…
Still its scary to learn of the plot this week by getting emails from them about these bomb threats.
Mr. Al-Quesadilla, please dont’ bomb the the shul that I don’t set foot in. If its not going to be there for future generations of Jooz to use, I want it to be because of my principled stand, or at least the one I am purported to take (until I too have kids), rather than a due to your clumsy but scary terrorism attempt.
At the very least, I would prefer the aleph-bet soup Jooish defense organizations to exploit this event by soliciting funds in the name of defending Jooz from the very real turbaned boogey-men under our beds and laser printers. That way even more of us can be turned off by heavy-handed scare tactics (like we haven’t had enough of that with the elections…). It is not without irony that I hear the whir of printer drums warming up to spit out millions of fear-filled solicitation letters.
Now, I have to write a paper for Stephen Cohen and my printer is running low. Can anyone send me a spare a toner cartridge? 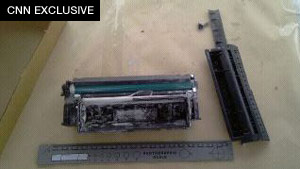 Fight for Iranian Freedom, Not for Bombs or Sanctions