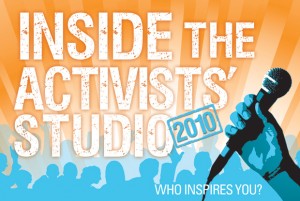 Cross-posted from Pursue’s blog with permission.

Putting the spin on justice!

While you’re eating those potato latkes and thinking about who inspires you, take a moment to put the spin on justice! Challenge yourself to bring light into darkness and wager on your commitment to social justice.

This weekend, join Pursue at Inside the Activists’ Studio in New York and Guilt-Free Gelt in San Francisco to spin in person! The spin is below for playing at home.

The Justice Spin doesn’t require actual tokens or gelt – it’s an opportunity to spin the dreidel over conversation and see where you land. May it inspire you and your friends into action for 2011!

Nun — Do nothing – but don’t skip your turn! Sometimes, doing nothing can actually be doingsomething when it means taking time to rest and be healthy and to nurture your spirit in order to sustain yourself for all the important work you’ll do before next Hannukah. Take a break!

Gimel — Jackpot- you have it all! Do something BIG and make a difference in the world! Invest your time and your resources in your local community.  Find the justice issue you care about, and support it.

Hay — “Hey!” Say something. Be an advocate. Write a letter to the editor of your local paper about an issue that matters to you. Contact your elected officials to describe the change you desire in your city, state, and country. Speak truth to power.

Shin — Give your gelt! Tzedakah derives from the Hebrew word for justice, rather than charity. Judaism sees donating money as a powerful and necessary act, an act of justice.

Spin away and make a change. It’s your turn!

Day schools want to drop out of USCJ