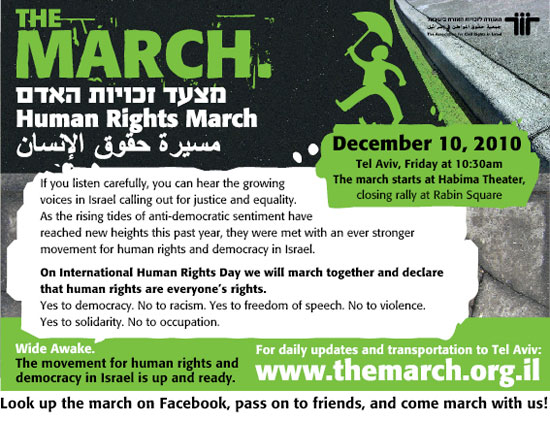 Jewschool is proud to publish this guest post by Nirit Moskovich, Yael Maizel and Ronit Sela, spokespersons for The Association for Civil Rights in Israel (ACRI), Israel’s largest and oldest civil rights agency. Follow their annual Human Rights March on Friday, December 10, starting 3:30 am EST on Twitter: #themarch.
It seems cynicism is our favorite pill these days, used whenever we get an allergic reaction to the latest “shtut” (ridiculous step or statement) made by our leaders and officials. How else should we react to a call for separate public buses, insisting that women sit in the back? To a legislative attempt to allow communities to discriminate against any newcomers, with the exception of “one non-Jew needed to turn on the light in my refrigerator if it goes off on Shabbat”, as elegantly put by MK David Rotem? To a racist smear-campaign against African asylum-seekers and migrant workers “who are swamping Israel and spreading deceases like HIV”, as the Interior Minister lied to the public?
Our leaders and the press are competing with each other now: Who will speak louder against “disloyal traitors”? Who will do a better job at silencing and pushing aside legitimate criticism? And who will simply stand idle while our country is losing its mind?
Xenophobia and incitement are not the sole actions of the zealous. They are part of an overall scheme by cynical leaders to solve serious problems that should be publicly debated by simply pointing a figure and saying “Look at her! She’s to blame!” This way no one looks at them and holds them accountable. Therefore any time the average “man on the street” is caught on TV cameras speaking out against Africans, voicing racial slurs against Arabs, and explaining that the whole world is against Israel because they are Antisemitic – then the politicians can be satisfied that they have done what they sought out to do. “Am Yisrael” is exactly where they wanted them to be.
Some of us role our eyes, laugh at the stupidity of our politicians, pull the covers over our heads and hope that soon it will all be over. Others buy into the explanations our leaders are trying to feed us: They tell us human rights are a luxury for peacetime. They tell us not to be naïve; that security comes first. They say, why fight for human rights when our safety is in danger?
But without hesitation we ask back, what good is this security you speak of when there are no human rights? What good is it when a teenager’s wellbeing is threatened because of his sexual orientation? What good is it for the homeless woman who cannot afford a roof over her head? What good is it for the Bedouin family and their neighbors who have no electricity in their homes? And how secure am I really, when the government has my personal information stored in a Biometric Database? After all, we remind them, in the words of Martin Luther King, “True peace is not merely the absence of tension; it is the presence of justice”.
This is why on Friday, December 10, on the day of the Universal Declaration of Human Rights, we will march together in the streets of Tel Aviv. This is a struggle that must be fought together, as human beings who respect the basic rights of each and everyone. We will stand shoulder to shoulder to show cynical politicians, advisers and journalists that we may be rolling out eyes, but it doesn’t mean we’re not putting up a fight. We have no intention of being silenced, and we demand to get what we deserve: To live in a true democracy and be part of a tolerant and just society. We march to remind Israeli leaders and the general public that there is no real security and no justice without human rights; that there is no way we will tolerate racism and discrimination in our communities, and that we will not allow our democracy to fail us.
Because otherwise, what are we fighting so hard to protect?

How to tell if you're a liberal anti-Semite