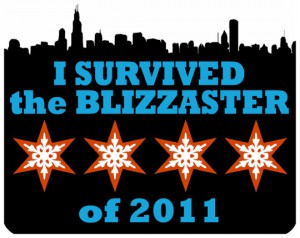 Having now dug out of the Chicago storm code-named Blizzaster, I’m hearing some interesting stories emerging beyond the spontaneous Parking Lot formed on Lake Shore Drive. So much parking so close to the lake is a miracle unto itself, but what about the snow?
One cool story is the Chuppah of Sarah Finkel and Shmulie Schochet (they had a Ketublizzard).

“It’s a happy occasion that the snow cannot deter. The snow does not change anything,” said Bernie Finkel, of Evanston, the bride’s grandfather. “There is thought in the Jewish religion about luck: the dew in the spring at Passover, the rain in the fall during Sukkot. And now I am saying snowfall is lucky too. This is a special time. There should be a special time to pray for snow.”

By now, most of us are pretty tired of snow. But Finkel (who hosts a local Jewish radio program) raises an interesting point. It is truly a wonder to get such an amount of snow. Surely we should acknowledge HaShem’s hand in such an event, yes? What would the text be for a Prayer for Snow (or its speedy removal)? I wanna hear it. Make it snow!

The Israeli "rabbanut" – not deserving of the name