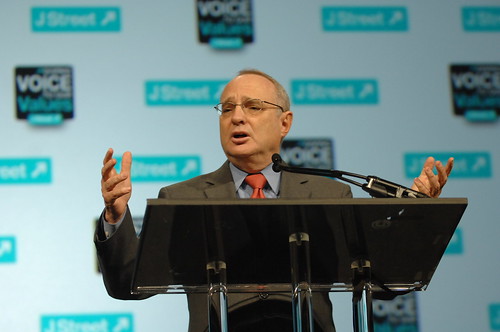 I find myself overwhelmed. My heart has been bursting with pride for two days. Tomorrow I lead two delegations to legislators on Capital Hill, bouyed by the show of grassroots power I just witnessed. Check that, no, that I have helped build. This weekend, I remember why I do what I do. And I celebrated with the fruition of our planting.
At opening ceremonies on Saturday night, J Street flexed 16 months of growth since their last conference for show. That’s what political conferences are for, after all. And what a showing — purportedly among the top five largest gatherings of Jews in America. (AIPAC’s annual showing is 7.5K, the General Assembly is roughly 5K, URJ’s Biennial is too, and J Street is over 2K.) Waves of cheers erupted as each of 40 local chapters took shout outs. Then a parade of beaming students marched across stage calling out each of the 138 campuses represented. Waves of cheers. The who’s who of progressive global Jewish life was there — including Canada and the UK. The 30 sponsoring groups included Israel’s leading human rights leaders, like Naomi Chazan and Hagai El-Ad. Rabbis, grassroots leaders, campus heads all gathered under one roof.
Rabbi David Saperstein enthusiastically delivered the opening address, a preacher in his element. Saperstein’s fast-paced and booming voice evoked a Judaism of aspirations: freedom, social justice, hope, and spirit. Peace is God’s work, we remembered. Peace wasn’t a wussy buzzword. Peace was power. Compared to the sullen crankery of Rabbi Eric Yoffie last time, Saperstein was inspirational.
Like his boss before him, he delivered criticism as well, warning attendees:

“You matter politically, you matter media-wise. And all of your members can feel they are part of something that has influence and impact. You will on the one hand lose your energy if you lose your dovish activists. But you lose your political and media clout if you lose your mainstream wing. In assessing strategies and tactics, you need consider not only the theoretical positions you take, but the tactical impact of those you choose.
…But if you alienate the mainstream religious and political core of US support, you risk losing everything. Are there going to moments in the history of Israel-US relations with a significance of momentous decision that will really make a difference require you to push the envelope? Perhaps even alienate some of your mainstream religious and political constituents? Yes. But they must be few and far between, of the utmost importance where you really have a chance to change the outcome by weighing in, and where you work diligently with your supporters on the Hill to bring them around to this decision.

This would be only one of the first of many moments when conference speakers would issue challenges to J Street, which would include lefty Middle East commentator Mona Eltahaway and Kadima members of Knesset. Here J Street role modeled for a narrow-minded and intellectually stifled mainstream how open conversation strengthens, not weakens. Over the weekend, panels would feature speakers greatly at odds with J Street’s (and the mainstream’s) positions, yet who were greeted respectfully. Even Noah Pollak, director of the Emergency Committee for Israel and a lead hater of J Street’s activities, was welcomed and treated without disrespect. If only the AIPAC annual event and the General Assembly could even flirt with such open-mindedness.
After J Street founder and director Jeremy Ben-Ami warmly thanked Saperstein, and turned to the three voices being honored: Peter Beinart, Sara Benninga and Dr. Izzeldin Abuelaish. An American, an Israeli, a Palestinian. Each spoke for the unique modern day experience of Israel — not the dreamy and perfect Israel conjured by mainstream white washers. J Street U student leader Mori Rothman said by way of Beinart’s introduction, “I love Israel. But I did not love the war on Gaza. I love Israel, but I do not love the way it treats its minorities. I love Israel, but I do not love the occupation of Palestinian land.”
Beinart himself began his speech by dating the foundings of new progressive Israel organizations paced with the population increases within “non-democratic Israel,” his clever reframing of the settlements. While he paid due to J Street’s partners and predecessors he warned:

And so we come together knowing we are not the first group of American Jews to gather in defense of the principles in Israel’s Declaration of Independence. But make no mistake: we are the last. There will be no next J Street. If we fail, our children will meet in halls like these not to defend democracy in the Jewish state, but to mourn democracy in the Jewish state.

Benninga represented the many leaders of the Sheikh Jarrah protestors, a new generation of young Israeli activists who have breathed revived energy into the Israeli left. While Beinart’s words were about Jewish sovereignty and Holocaust legacy to preserve Jewry, Sara spoke to human rights, called out Jewish privilege, denounced racism in Israeli society, and spoke truth to power. It was a reflection of a new paradigm on the left — to hell with demographics, this is about simple equality.

Lastly, Dr. Izzeldin Abuelaish reminded us of tragedy, relating the loss of his three daughters to a tank shell in Gaza. Whereas tears of hope and pride wet my eyes throughout the night, Abuelaish reminded me why I’m a peace activist in the first place: to stop death on both sides. Not a dry eye was present in the room. I remembered every Israeli and Palestinian I’d ever met who’d lost someone they loved. That is why I fight for peace, make it my daily work, even rely on its meager rations to pay bills. Abuelaish lost his three daughters — yet has not lost sight of the goal, an end.

Whatever criticisms one may have of J Street as an organization, you cannot minimize the sheer demand for it. Barely two years ago, I was the NYC head and a national board member of Brit Tzedek v’Shalom, holding and planning an annual lobby day just like this. We had at most 300 people, a rump oft-dismissed by mainstream types. Who would have thought that now there would be so many of us? The number of attendees and quality of speakers confirm the words of Hadar Susskind, “J Street’s success is half Jeremy Ben-Ami, half the vacuum it filled.” The establishment failed to include us; now we come ‘a calling. So much for those predictions of J Street’s demise. The greatest refutation of the attacks on J Street is recent months is on the beaming faces of the people here: we are the future of the Jewish community, here to get even bigger.
More conference coverage to come.