At 6:15am on Rosh Hodesh Adar Aleph, I stood at a bus stop on Derech Hevron by Tzomet Habankim. I watched Israelis get on and off the green public buses and waited until a blue and white mini bus pulled up. I boarded the Palestinian bus which runs from the entrance to Bethlehem to East Jerusalem, paying only 5 shekels instead of the regular 6.40 NIS. 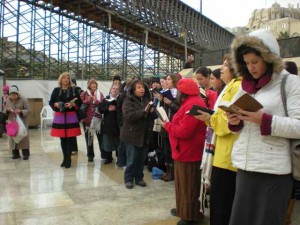 It was a quick ride with almost no stops until I rang the bell for Jaffa Gate. I was the only passenger to descend from the bus. 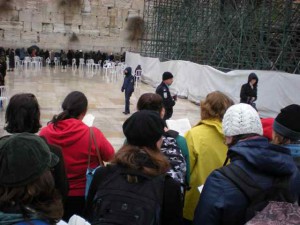 In flowy green pants and a purple skirt, I made may way through the pouring rain toward the kotel. I was grateful to both fit into the hippy Jerusalem culture as well as the serious feminist activist group that was having their monthly meeting of worship, song, and taking a stand.
As I approached the plaza, I heard loud voices of men singing a Shlomo Carlebach niggun. Why were they singing so loud? Was it because of Rosh Hodesh? Was their joy pure? Or could it have been do drown out the women’s voices close by on the other side of the mechitza? Having been at the kotel the week before for Havdallah, straining to hear the words of the blessings, my instinct was that this loud singing was the latter.

I was greeted on the women’s side by women of all shapes, sizes and accents. Some smiling, some deep in prayer, some simply watching the scene. A male police officer paced in front of us mumbling into his shoulder radio: “In my life, in my life I’ve never seen anything like it.”
As I pulled my tallit from my backpack, I noticed a change from my previous encounters with this group. Having been to these gatherings almost ten times since the summer of 2000, I knew that the fact that some folk were wearing their tallitot publicly (i.e. on the outside of their jackets) was a big deal. And yet, it still felt so limiting to leave my tefillin in their pouch.
The Hebrew accent of the woman leading hallel washed over me – it was a new sound that inspired and connected me to these nameless women. I glanced behind us at the male allies davening behind the fence – it was difficult not to resent their ease of wearing tefillin and singing aloud. The mix of their voices with ours gave me pause. I noticed a small black cat climbing the rocks under the ramp toward the upper plaza–how pleasant to be a small furry border crosser. 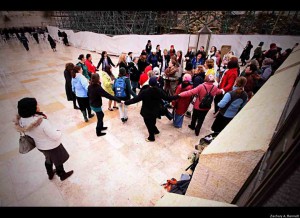 Soon our songs of praise became a circle dance – the circle with no end and no beginning – we grasped arms and hands and belted out our carlebach niggun high and wide. Unlike so many visits over the past decade, we continued undisturbed. The rain lightened. 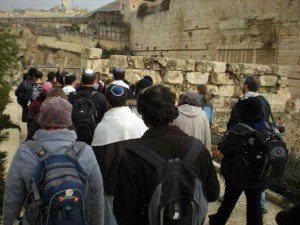 As hallel concluded we began the levitical march with the Torah to Robinson’s Arch. After ignoring a few insults from onlookers, we made our way to the corner where we could continue our service with Torah reading and Musaf. A handful of us revealed our tefillin, and the Torah came out of her duffel bag.

I was blessed to be the first Torah reader that morning. Five years ago I also read Torah on Rosh Hodesh Adar, in honor of my Adar birthday. I felt the energy of the group’s intention through chanting each word – this is what it feels like to stand for something.
In an odd chiastic dance, I then removed my tefillin for musaf. I was able to step back and see many more stones than are visible at the main plaza. I also noticed the small black cat who had joined us, without passing through any metal detectors. As the rain became heavy again, we made our way to a modest kiddush.
With joy in my heart, I bid farewell to these diverse women, wishing them good shabbos and hodesh tov. Ironically, after this gathering I made my way to a men’s only oneg at a yeshiva connected to the Hurba Synagogue, followed by a small wedding in the pouring rain at Aish HaTorah – all before noon. In the spirit of Adar, V’nahafoch hu! 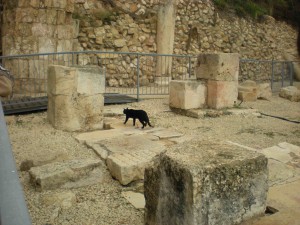 Cross posted to Women of the Wall. For additional photos, see the Huffington Post Photo montage.

Standing together in the City of Big Shoulders

Will Israel make it to the World Cup?