I know that most of us have forgotten all the fuss about the new(ish) scanners in airports because we all have the attention spans of gnats, but they haven’t gone away. The problem that travelers (including the parents of young children) still have to make a choice between being seen naked by persons with whom they have no intimacy, or being groped intimately by the same people -still remains. 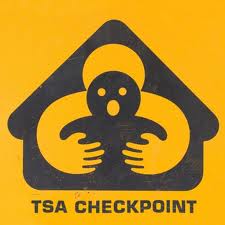 And it is curious how quickly we have become inured to this violation of dignity, tzniut (modesty) and personal space (note that I’m not even binging up the question of health and safety, even though it is still unclear how safe these machines are particularly for pregnant women and children). The argument that has been offered is that it is needed for our safety, but the truth is that it is needed mostly for two things: 1. to increase profits for the company that produces the scanners (Rapiscan – a rather infelicitous name, which by the way, was promoted by Michael Chertoff while Secretary of Homeland Security, and was a a company that was one of his clients, a coincidence? Really?), and 2. to continue the process of slowly lulling us into giving up more and more of our rights as citizens in the name of “security.”

As we move towards Pesach, I have been thinking about this in reference to “B’ferach.” The Torah tells us in the first chapter of Shemot (1:13) that the Egyptians made the Israelites work “b’ferakh.” Although the literal meaning is “ruthlessly,” the Yalkut Shimoni (and others) understand this term to “b’peh rach,” in other words, with guile and gentle speech (שמות – פרק א – רמז קסג) . At first they said, “well, just make a few bricks, will yah?” and by the end, they were doing all the work of the field, all kinds of hard labor. They oozed the new changes in so that no one noticed – the proverbial frog in boiling water. Moshe Chaim Luzzato in Mesilat Yesharim says it more plainly, “This is one of the strategies of the of the negative inclination and his craftiness, to increase the work with constancy upon the peoples’ minds until there remains no time for contemplating or observing in which direction they are going…This is one of the advices of the wicked Pharaoh, as it says; ‘Increase the work load upon the people…(Shemos 5:9).’ His intention was not to leave any space for them to think at all and discover a method of resisting.”
In this case, we’re talking about physical labor, but the principle is the same: distract and increase slowly – they won’t notice how quickly their freedom slips away.
And am I some kind of conspiracy nut, that I’m saying that our government is doing this? Well, first of all, no – I don’t think it’s because of a power grab, per se – it’s just the usual: greed, and lots of it – Chertoff taking kickbacks, Rapiscan wanting profits, etc. (same thing in Wisconsin. Scott isn’t evil, he just likes his luxuries, and doesn’t care who else’s basic needs he has to take away to increase them).
But mostly this: we don’t need pornoscanners OR groping to keep us safe. Asa matter of fact, the scanners are easily fooled – a pancake shape will do it. They don’t register plastics as dangerous, they don’t see under fat – so if you want, just feed up your terrorists before sending them out, and so on… but best of all, there IS a very good method of catching risky travelers, and we already have the technology, if we’re willing to spend the money. The catch is that you have to give them decent pay, good training and benefits, because minimum-wage thralls probably won’t work. Bur Israel does just fine using – yes, people.
They use something called “profiling,” which is not what we mean when we say “profiling.” People always get weird when I say that word, but what it means is that the guards ask targeted questions, and watch the behavior of the people when they answer; it has nothing to do with race. Well, it’s a little more than that. First of all, the screening starts before you ever get into the airport – there’s a drive through checkpoint before you come into the precincts of the airport – which one could do by essentially setting up a toll booth (I’m thinking of Dulles airport here, which has toll booths – but not for people going to the airport….). That would already address the question which a lot of people have brought up, which is that if someone was determined to harm large numbers of people, it would actually be more effective to target them before they got on any given plane. The toll booth checkpoint – asks two questions – how are you, and where are you coming from. That’s it. Again, what they’re watching for is behavior.
Then you are watched by guards as you come in, in several places; and then, you are asked a series of questions by a trained screener, who looks you in the eye, and – yes, watches your behavior.
This much faster, non-electronic set of interactions is far more effective than the set up we have, doens’t violate anyone’s modesty, and the only drawback? You have to actually pay people and train them to do it.
You have to put some thought into the process. You have to think forward, instead of reacting the previous mistake. Probably why we haven’t done it yet. The only question I have really, is “Why haven’t we done anything about the pornoscanners?”
XPKol Ra’ash Gadol

What does ADL Stand For?

Is this the binational future?