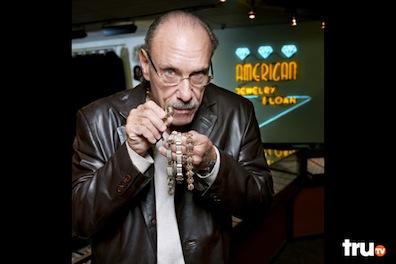 Meet Les Gold. Mr. Gold is the patriarch of American Jewelry and Loan in Detroit. His family business is the subject of Hardcore Pawn, a new reality television show on the TruTV channel. The show is a window onto the type of Jew we’ve come to associate with the Rhineland in the 17th century more than the American Midwest in 2011. The family that runs the shop is Jewish, not only in the plain meaning of the word, but also in the symbolic, nasty sense of the idea – The Golds are sometimes benevolent, sometimes nasty moneylenders serving a predominantly impoverished, black clientele in the middle of Detroit.
With over two million viewers, Hardcore Pawn is often compared to Pawn Stars, a History Channel reality TV show that, like a blue-collar Antiques Roadshow, presents a gang of Vegas hacks appraising antique soda machines and the Civil War currency. Yet, in reality, Hardcore Pawn isn’t really interested in appraising anything but the fraught relationship that one Jewish family has to the black ghetto in America in our own times. It’s ethnic and racial antagonism presented in documentary style, where the Jews try to pay as little as they can for gold and electronics from a population mired in stress and aggression, with a little bit of tenderness if the need arises.
The show demonstrates a few scenarios. An angry black woman arrives to pay off her interest, only to find out that after waiting 45 minutes in line, she doesn’t have enough money to retrieve her child’s video game console. In another, a poor, elderly black man brings in a ring so he can pay his rent, only to be told that his last valuable possession is worth about ten dollars to Les Gold’s son, Seth. In another, an aryan-looking white woman brings in what she says is Eva Braun’s swastika-bedazzled bracelet. Les Gold says he’ll buy it if its authentic, stating that he’ll use it to teach his grandkids what the Gold family endured during the Holocaust. (Nevermind the bracelet is a fake.)
What an embarrassment.

Agree or disagree: the Jewish state gives my values headaches

The choice of a new generation