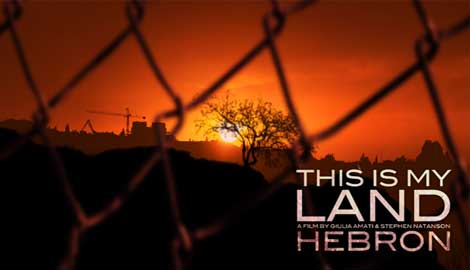 L, my companion for the evening, wonders if we can say we actually saw Wallace Shawn, who appears to be sitting three rows ahead of us. It’s definitely him, right? We strain our ears for his trademark voice,  but the din proves too much for us discern properly.
This is not really important, of course, a celebrity sighting at the screening of  “This is My Land, Hebron,” at the Human Rights Watch International Film Festival. It is, however, a reminder to myself to be observant of the audience, which I have come in worried about. The theatre is full, and this is both joyous and disconcerting. Who are these people? Did someone make a phone to right wingers to come and start a ruckus? Is someone going to say something anti Semitic? Some people walk onto the stage and sit down. The audience applauds. I sweat.
The three people, introduced by the moderator, are Dotan Greenberg, a former solider/ activist with Breaking the Silence, and the directors, Giulia Amati and Stephen Nathanson. The moderator asks if anyone would like to say anything before the film starts. Greenberg says that serving in Hebron has changed his views and how he’s active in the society he lives in.
“This is My Land” is a documentary composed primarily of footage and interviews from Hebron, one of the first of which is of a home covered with a wire cage. The owner of the house, a Palestinian woman in hijab, tells the camera that the wire is necessary to keep the stones thrown by Jewish settlers from hitting the people who live there, but that they’ve adapted by throwing smaller stones.

The film interviews some of the Jewish settlers (there are 450? 600? 800?),  and settler leadership who live in Hebron among 150,000 Palestinians. The settlers claim that Hebron is the  place in which the matriarchs and patriachs were born, making it “the heart of the Jewish people.”
A Jewish settler, a woman with covered hair and glasses, walks up to the wire where the Palestinian woman is standing. “Sharmuta (whore),” she shouts, and then, softly, “Sharmuuuttaaa.” It’s chilling and relentless, and the two women scream at each other, while the camera records. After this scene, every time a settler comes on the screen for the next hour and a half, the audience gets twitchy and tense and starts to whisper.
The voices of the  Israeli left featured in the film are prominent names -Uri Avnery, writer, former Member of Knesset, founder of Gush Shalom;  Jessica Montell, Executive Director of Btselem: the Israeli Information Center for Human Rights in the Occupied Territories , and Ha’aretz columnist Gideon Levy. “There is no place in the Occupied Territories I hate more than Hebron,” says Levy. ‘It is a place of evil.”
Yehuda Shaul, one of the founders of Breaking the Silence, spent 14 months in Hebron during his army service (he was actually Dotan Greenberg’s commander.) “One day, you’re looking in the mirror, and you see horns on your head. You think, it’s not me, doing this things, but it is you.” Now, in addition to giving testimonies and traveling with the organization, he gives tours of Hebron.
While escorting a group down Shuhada Street-the principal street for Palestinian residents and businesses and at one time, a prominent market place, now closed to Palestinian traffic- Shaul says to his group, “You’ll only get one perspective today, and I’m sorry for that.” Standing near by, shaking his head, is David Wilder, Hebron settler spokesperson. According to Shaul, Wilder won’t talk to “traitors.” “In any other country,” says Wilder, later in the film, “(Shaul) would be charged with treason and hung.”
There’s footage of a young Palestinian man who’s shackled for 14 hours, allegedly for protecting his sister from IDF forces invading his home. He tells the camera that he’s been beaten on his back. Settler children yell at and knock down internationals from the Christian Peacekeepers. “That’s what you get for defending Arabs,” one girl says. In another scene, Palestinians picking olives while settlers look on, and then eventually face off with soldiers, who tell them that the Palestinians are allowed to pick from their own groves. There is screaming and swearing and accusations. At some points, I’m so uncomfortable that I try to re read my notes in the dark theatre, which is of course, impossible.
“I’m deeply ashamed,” says Levy. “It’s on my behalf, all Israelis are paying the price. The idea is to drive the Palestinians out, create impossible circumstances. We’ve become a country who only cares about ourselves, and maybe not even that…this is proof that the Palestinians are some of the most tolerant and non violent people in the world. Anyone else would have exploded.”
When the film is over, the audience is restless. Nathanson, Amati and Greenberg return to the stage. Amati talks about how hard it was to obtain the settler’s point of view, and without it, making the film would have been useless. And now, the questions. One woman asks why so much of the focus of the film was on Shuhada Street, instead of on the rest of the city. Greenberg: “If you went to Manhattan, and Broadway was closed and only white people could walk on it, wouldn’t that be a story?” She’s not satisfied by his answer and has to be shushed into sitting down.
Every time someone gets called on, I hold my breath anticipating the question.  “Why did you only focus on settler violence against Arabs?” asks an audience member. “In Hebron,” says Greenberg, “Palestinians know the recourse. You don’t see Arab on Jewish violence because everyone is aware of the consequences-curfews, collective punishment. The soldiers are there to protect settlers, and they know the consequences of looking like if they side with Palestinians. That’s why the consequences for Jewish kids throwing stones are different from those of Palestinian ones.” Amati adds that while filming, they never witnessed any Palestinian violence against settlers.
Greenberg is also asked to comment on his experience with Breaking the Silence  in Israel. “Settlers in Hebron are very extreme,” he says, “Not like most Israelis. Most Israelis don’t respond like they do.” The film has not yet been distributed in Israel, but there are plans to do so.
When the q/a is over, and everyone is leaving, I hear a woman’s voice behind me. She’s been making comments to her friends the entire time (“Yeah, that will go well,” re-distributing the film in Israel) and sighing gustily after each of the right wing-y questions. “”Those people,” she says, disgustedly, gathering her things, “Why don’t they go back to Brooklyn where they came from?”

The Vort: Tazria & Metzora – Not a Question of If, But When