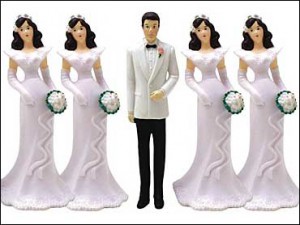 Over on Salon, Tracy Clark-Flory declares that sexlessness (or at least articles about it) are officially a trend. Which strikes me as funny, because the article just below that one in the queue is all about the rise of non-monogamy (which together with Dan Savage’s proclamations that people should consider non-monogamy and today’s JTA headline that an Israeli group of Orthodox rabbis (c’mon, you knew this was coming!) is trying to bring back polygamy (a trend that even the Torah implicitly warns against while not forbidding) definitely qualifies as a trend.
So what to get to first? I’m impressed by the ridiculousness of Erica Jong’s complaint. I’m not sure why Clark-Flory concludes that her complaint is that technology has taken over for the actual messiness and intimacy of sex – from what I can tell, her real complaint is that this younger generation prefers monogamy and childrearing to the raunch that she claims her generation championed. Look at the utter condescension:

Punishing the sexual woman is a hoary, antique meme found from “Jane Eyre” to “The Scarlet Letter” to “Sex and the City,” where the lustiest woman ended up with breast cancer. Sex for women is dangerous. Sex for women leads to madness in attics, cancer and death by fire. Better to soul cycle and write cookbooks. Better to give up men and sleep with one’s children. Better to wear one’s baby in a man-distancing sling and breast-feed at all hours so your mate knows your breasts don’t belong to him. Our current orgy of multiple maternity does indeed leave little room for sexuality. With children in your bed, is there any space for sexual passion? The question lingers in the air, unanswered.

Deep in the hearts of Jewish Texans…