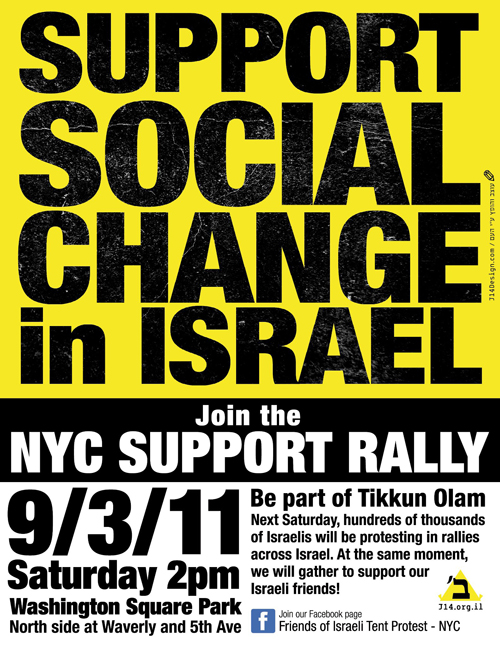 For the fourth weekend in a row, independently-minded Israelis in New York City are gathering to support some of the largest demonstrations in Israel’s history, in every major Israeli city demanding a change to Israel’s economic policies. This Saturday, Israel’s protest organizers have called for one million demonstrators to hit the streets. Possible or not, it’s the biggest change in politics there since 2002.
RSVP on Facebook, join the English– or Hebrew-language Facebook groups, and show your solidarity for average Israelis improving their own country. Read their full explanation below the fold, organizers are encouraging us non-Hebrew speakers to join as well. (Be prepared: learn by video tutorial how to chant “The people demand social justice!” in Hebrew.)

DO YOU KNOW WHAT IS GOING ON IN ISRAEL?
On August 6th, more than 300,000 Israelis took to the streets to protest for affordable housing, healthcare and education for all. Israelis from all regions and backgrounds have taken part in this 6 week long protest, thousands of them sleeping in dozens of tent cities that have sprung up across the country. More than 85% of the population support this call for a more just society.
On September 3rd, up to a million Israelis are expected to take to the streets, breaking the record set by the August protest.
Come to learn more about these unprecedented developments and to express your pride and support for this peaceful, democratic movement!
WHAT IS THIS ABOUT? WHY SHOULD YOU CARE?
Inequalities in income distribution and economic power in Israel are growing at an alarming pace, as a result of economic policies that were imported from the United States. Among developed economies, Israel is now second only to the U.S. in social inequality. Today, ordinary Israelis and ordinary Americans face similar problems:
● Like in America, through various tax breaks and loopholes, the wealthiest Israelis enjoy very low tax rates, lower than those of their employees.
● While the Israeli economy grew 12% in the last decade, wages have stalled. This means that the middle class is not enjoying the economic growth.
● Only 19 families control 54% of the private sector in Israel. They’ve consolidated control of banking, real estate, the media, and natural resources through deregulation and privatization of state resources, awarded by the government for a fraction of their worth.
● Housing has become increasingly expensive, and affordable apartments are hard to come by. Many banks require a 40% down payment on mortgages. For most families, homeownership is just a dream.
● Almost a quarter of the Israeli population is poor — the worst figure in the West. Moreover, in most poor families at least one of the parents is employed, yet still cannot provide for her family.
● With the rising cost of living, even hard-working, highly-educated middle class Israelis feel that they cannot make ends meet.
The protest in Israel seeks to correct structural biases and fundamentally alter government priorities. The demands include fundamental tax reform, decentralization of the economy to increase competitiveness, stop coddling big-money and support affordable housing.
“Justice, justice, you shall pursue”
Your support is important!
Join us at Washington Square Park, Saturday, September 3rd, 2pm