In what seems like a development only possible on the satirical pages of the Onion, Mel Gibson’s Icon Productions has just unveiled plans to co-finance a new film about Judah Maccabee, with Joe Eszterhaus of Showgirls fame onboard as screenwriter.  This is too good to be true. I mean, who better than 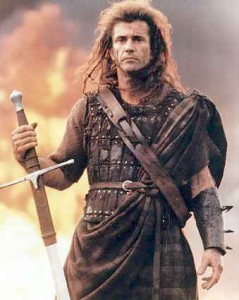 Mel Gibson, the man who boldly asserted that Jews are responsible for all wars in the world,  to capture the quintessential epic military struggle of Jewish national religious pride versus the lures of assimilation?

I can see it now: in a creative twist on the Hanukkah story as related by the Talmud, Mel Gibson’s Hanukkah Tale: The Jews burn for eight days.
In light of this exciting news, I’d like to offer Mr. Gibson some free advice as preparations go underway for this sure-fire blockbuster:
Free Casting Advice to Mel Gibson from a Jewgirl Cinephile:
The first one is a no-brainer: we’re casting Russell Crowe as Matisyahu (if the connection isn’t obvious to you already, here’s a hint: follow the first link and check out 1Maccabees 2:46)
The role of Judah Maccabee is a tough call, but I think our winner is Vincent Gallo.
In his debut dramatic performance, Prince Harry of England will play Jonathan Maccabeus, and comedian Andy Dick will play Simon Maccabeus. John Hyrcanus will be played by Rick Sanchez.

Charlie Sheen needs a role in this cinematic masterpiece as well.  Let’s cast him as Eleazer Maccabeus.

We’re going to offer the role of Antiochus to Mahmoud Ahmadinejad—an offer he surely can’t turn down.
Oh, and wardrobe will definitely be by John Galliano.
Well, time will only tell what choices Gibson will make, but if he sticks to my above plan, we’re going to have something even greater than The Passion of the Christ (2004).  Or, as Reb Yudel puts it, “If Gibson’s Hanukkah film succeeds, can his Tisha b’Av blockbuster be far behind?”

Incidentally, I vividly recall dragging a date to a Sunday matinee screening of his last Jew epic in 2004. We paid for two tickets to see Dirty Dancing: Havana Nights in the hopes that our tickets wouldn’t profit Gibson’s film, but later, a friend in the industry explained to me that films only benefit from concession stand money, not from actual ticket sales. Alas.  The film itself wasn’t particularly noteworthy, aside from its curious subtitling choices. While Gibson promised to cut out any direct implication of the Jews in Jesus’ crucifixion, the English subtitling did not always match the Aramaic dialogue onscreen. (I attended a high school which forced us to learn Aramaic. Now on facebook, I smugly resent that under the languages option, there is an “Aramaic of Jesus” and not also an ‘Aramaic of Rabban Gamliel.”)  We, along with busloads of young Christian children, some of whom were as young as four years old, proceeded to watch what amounted to two full hours of Jesus being beaten to a bloody pulp. ::Spoiler alert:: Jesus is killed.