This guest post is by Jocelyn Berger, former Bay Area Program Officer for Pursue: Action for a Just World, a project of AJWS and AVODAH, is now a graduate student in International Affairs at The Fletcher School of Tufts University (orgs for identification only). Photo courtesy Dory Dinoto. (This is the first of two Occupy Boston reflections. See the second by attendee Alex Sugerman-Brozan.)
What do Yom Kippur and the Occupy Wall Street movement have in common? Both are about imagination. On Yom Kippur we imagine that a better self is possible. At Occupy Boston, we imagine that a better country, a better world, is possible. And although these are individual imaginings, we come together in community to make them collectively realized. By moving Yom Kippur from a sequestered, individualized experience in a synagogue out into the public square (literally!), we transform the purpose of the holiday from simply imagining a better self to imagining an whole better world.
Undeniably, one of the most exciting things about this movement is how democratic and collective it is. This rang especially true as we recited the Sh’ma together at our Kol Nidre service, proclaiming oneness – of our voices, of our values, of our aspirations, of Hashem, all one and the same, unified. My emotional climax occurred during the Al Chet – we invited folks to call out sins, personal, political, economic, social, all repeated through “the people’s mic,” adding even greater resonance: “Racism. Turning our backs on the old. Turning our backs on the young. Climate change. Defunding women’s health programs. Putting profits before people (aka capitalism). Citizen’s United. Private health care. Eroding the social safety net. Blaming victims. Katrina. Sexism. Homophobia. Anti-Semitism. Islamophobia. High interest rates. Student loans. Unemployment. Not taking responsibility sooner. Not speaking out sooner. Not showing up sooner.”
We concluded with the same reading as our sibling minyan at the Occupy Wall Street, and I felt the deepest sense of truly crying out to God, wailing for forgiveness, supplicating and begging – I burst into tears and saw that many in the crowd were similarly moved. Such immense sins, such huge problems – how can we ever forgive and move on and build something better?
We all said the Mourners’ Kaddish together for the values and virtues we’ve lost, for the American dream that now seems dead, for the lost livelihoods, safety nets, and security. For the victims who have been crushed by this oppressive and unjust system. For all that we’ve lost, individually and as a society. Adding on this additional level to the already solemn prayer further increased the deep meaning and significance. Yet with all the despair, the service left me with a distinct feeling of hope at what is possible. None of this existed before 30 hours prior, when a few of us starting getting in touch to organize the event. In such a short time, we convened a congregation and created a sacred space of prayer, repentance, imagination, passion, emotion, mourning, idealism, and hope.

On Saturday many of us returned for the morning service, with new faces too. We concluded with a beautiful tune: “May the song we sing/speak for us, may the song we sing/speak for us, when we come to the end of the road/and lay down our heavy load, may the song we sing/speak for us.” A larger crowd gathered as we changed the words: “may the actions we take,” “may the power we build,” “may the justice we seek,” “may the love we grow…” Afterwards, about 25 of us moved to the Faith and Spirituality Tent to read and discuss the Isaiah haftorah. A theme emerged of about particularism – should we be out as Jews at this protest, or should we just blend in with everyone else? How can you be part of a tribe without being apart?
Personally, I find it very important to be out as a Jew – not only to show the protesters and passers-by that Jews are part of this movement, but also to show the Jewish community that social justice is a legitimate and foundational Jewish value. So, when a handful of us chose to join the labor march after our text study, many of us wearing the traditional Yom Kippur white clothes, I kept my great big rainbow tallis on. We carried a sign: “We are the Jews of the 99%, we pray with our feet.” I had in mind the image of Heschel walking with Martin Luther King, Jr., wearing a tallis, saying those words. I felt incredible pride to channel that same moral authority and visibility.
Yes, there were points during the day when I missed hearing some of my favorite tunes, the Torah reading, a moving sermon, the kavanah of davening without distractions of food trucks, teenagers playing electric guitars, and echoes of the people’s mic on the other side of the square. This was a different kind of Yom Kippur, indeed – in which the streets became my sanctuary. In which I repented for truly collective sins, not only my own. In which I marched for hours in downtown Boston as a cry out for something better, instead of prostrating during Aleinu in shul. In which my voice – each of our voices – became amplified as much greater whole. In which I answered Isaiah’s call to go free the oppressed, and received immeasurable meaning in return. 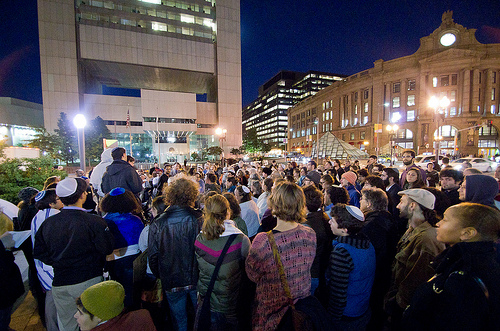