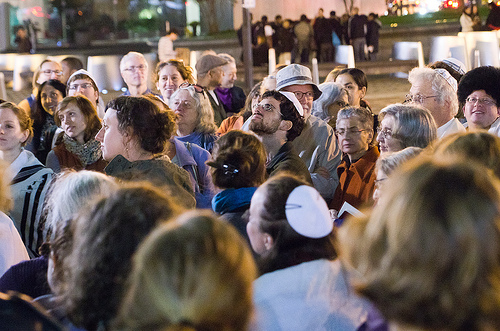 This guest post is by Alex Sugerman-Brozan. Alex is a labor lawyer and part-time activist and tries hard to be a mensch. Photos courtesy HowardC. (This is the second of two Occupy Boston reflections. See the first by organizer Jocelyn Berger.)
Tonight, I attended Kol Nidre services at the site of Occupy Boston. It goes without saying that of all the services, Kol Nidre or otherwise, I’ve ever attended, this was in the unlikeliest setting. Occupy Boston is situated at Dewey Square, a park near Boston’s waterfront, and in the heart of Boston’s financial district. It is right between on- and off-ramps to several major highways. At least 120 people davvened in the midst of rush-hour traffic, trucks honking, commuters streaming toward South Station, and the hustle and bustle of the experiment in radical community that is Occupy Boston.
Reciting the Vidui and the Al Chet has special resonance in light of the Occupy encampments. “We are the 99%” is the motto of Occupy Wall Street and its now-global offshoots. The 1% are the wealthiest in our society – the big banks, the investment firms, the global corporations and their CEOs – who possess an enormously disproportionate share of the wealth and who do not contribute their fair share to our common good.
But the confessional prayers of Kol Nidre reflect a different light on the 99%. These recitations of a litany of sins, mistakes and misdeed hold us all responsible, whether we partook in the particular act or not. When we read Isaiah on Yom Kippur, he inveighs against the sins of our society, in which we all bear a hand. As Rabbi Abraham Joshua Heschel said, “Above all, the prophets remind us of the moral state of a people: Few are guilty, but all are responsible.” The sins of Wall Street and corporations are all our sins – we buy the consumer products, we put our money in the banks and the mutual funds, we elect the leaders who fail to remedy corporate excesses. We are all the beneficiaries of these sins, even when we protest against them. Tonight at Dewey Square we inveighed against – and sought forgiveness for – and forgave sins like foreclosures, inadequate health care, cuts to social services, climate change, and countless other crises born of and worsened by corporate greed, we were forced to acknowledge our own role in them, and the benefit all of us derive from them (some of us much more than others — depending on the color of our skin, our gender, where we were born, our sexual orientation, and many other things). 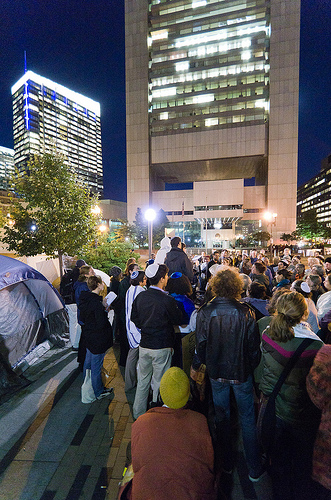 One of the first teachings in Bereshit/Genesis is that human beings are created b’tselem elohim – ín the image of the Divine. Judaism draws from this its teachings about both the inherent goodness and the inherent dignity of all people. The 1% — whoever or whatever “they” are – are created b’tselem elohim. It is a core tenet of progressive social movements that we do not necessarily blame the individuals within institutions, but the institutions themselves, and the structures that give those institutions so much unaccountable power. There are good people within the big banks, within the global corporations, within the halls of Congress. And those good people may be doing very bad things – even evil things. But they remain b’tselem elohim, even when that image of the Divine is buried deep beneath layers of greed and cynicism.
So to me, the 1% is all of us. It is that part of us that is susceptible to greed and cynicism. In some of us, those tendencies dominate over our better traits. In a rare few, they are subsumed to our highest potential for good. But in most of us, we struggle constantly with our greed and our cynicism. The Talmud teaches us that we each have a Yetzer Hara and a Yetzer Hatov – an evil inclination and a good inclination. And the Talmud further teaches us that we need the Yetzer Hara – in the right proportion, it drives us – to earn a living, to start a family. When the Yetzer Hara gains too much power, drive turns to greed, purpose turns to blind ambition, and power corrupts.
To me, then, the 1% is the Yetzer Hara and the 99% is the Yetzer Hatov. Social movements must be proceed on the belief that everyone can change – how we act, how we talk, how we listen, how we deal with our fellow people and the Earth. The key is to return these inclinations to their proper proportions – in ourselves, in our communities, in our economy, in our government, and in all our institutions.
So on this Yom Kippur, I look with wonder and amazement at the waking up going on around the world – from the Arab Spring to J14 in Israel to Occupy Wall Street and beyond. We are indeed the 99%. We are also the 1%. In the New Year, let us work towards reconciling these.

Peace in the home