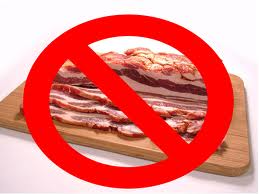 Feministe has a round-up on the recent squabbling about whether or not religious organizations that don’t approve of birth control should have to have health plans cover it.
Aside from the misogyny and offensive attitudes on display in general, let us analyze the statement made by a few people that requiring such organizations to require it would be like serving bacon at a Jewish barbeque. Well, let’s see: suppose someone attending the barbeque had a life-threatening illness that required them to eat pork. And supposing that person had to attend the barbeque and to eat while there. Well, now, I suppose they’d just fire up a separate grill upwind, since under those circumstances, Jewish law requires them to eat it. And if they weren’t Jewish? All the more so.
Now, shut up.

The Right Way to Criticize Israel