Eddie Long, a Georgia based mega-church preacher, has been crowned king… Yup, you read right. Crowned king. King of what? 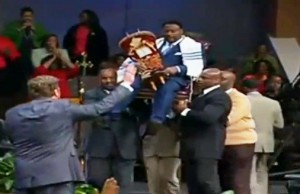 Damned if I know. He was crowned king by “Rabbi” Ralph Messer, a self-indulged so-called Messianic Jew (but even the Messianic Jews have disavowed him, now that takes talent) led this obscene ritual at New Birth Missionary Baptist in Lithonia, GA. Videos abound on the web, I didn’t want to give one another view.
Long has claimed ignorance and that he meant no offense. Eddie Long was in the news a couple years ago accused of sexual abuse.
The “rabbi” who conducted this grandiose show claimed that the Torah scroll used to enwrap Long in during the ceremony was saved from Aushwitz-Birkenau; an unlikely factoid considering how difficult it would have been to hide a Torah scroll in those circumstances, but that does not prevent him from abusing the memory of those who perished in the Shoah, claiming that “the dust” may still be on the scroll. 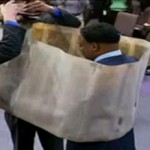 The whole thing just reeks of showmanship, grandiosity and the worst forms of appropriation.
Bill Nigut of the Anti-Defamation League took Messer, Long and the whole affair to task calling it a “fake Jewish ritual.” That is generous, IMHO. Others have chimed in with their own condemnations.
One cannot help but be reminded of Shabbtai Tzvi and other false messiahs.
On the one hand, it’s hard not to laugh at this kind of nonsense; on the other hand it’s hard not to vomit.

And God Said… what exactly?–a review of "And God Said" by Joel Hoffman