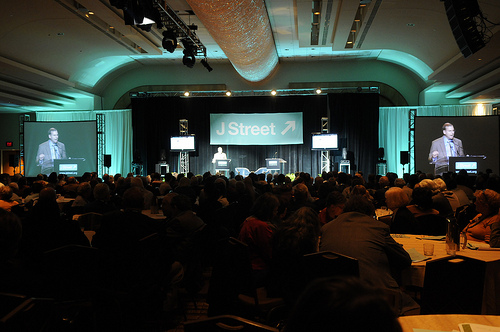 Some perspective: In 2006, the Second Intifada was barely tapering off. Peace fatigue was high – disbelief was even higher. Yet a plucky little organization composed of grassroots Jewish activists in dozens of cities across America was hard at work. No, this wasn’t J Street. J Street would be founded a few years later by Washington veterans seeking to compliment this grassroots network. This was Brit Tzedek v’Shalom.
I was the New York City co-chair for Brit Tzedek and a board member in charge of online outreach. We had a budget of less than a half a million dollars. Our single paid organizer managed a membership of 36,000 across America and some two dozen sizable chapters. In NYC, my small activist team worked alone and overwhelmed in American’s biggest Jewish community to be a pro-Israel, pro-peace voice. A national tour took Combatants for Peace, featuring former IDF soldiers and former Palestinian militants, to packed synagogues and JCCs across the country at a time actively hostile to peace. We held five annual conferences in Washington, DC. We were incredibly proud to have a whopping 300 attendees. Knesset leaders from Meretz and Labor sometimes came. Often our legislative meetings with Representatives and Senators were held in hallways and Congressional cafeterias.
The powers that be, namely AIPAC and allies, mostly ignored us for the minor fly that we were. Nobody campaigned against our membership in Jewish community boards or against our handful of campus chapters. But there was almost no discussion of peace and no place for pro-peace activism. At best, Jewish peace groups were quoted occasionally in the Jewish press. Americans for Peace Now was the press’ obligatory throw away quote when they wanted a pro-peace perspective. Jewish Voice for Peace was even pithier. None of the organizations ventured far from matters directly of the Israeli-Palestinian conflict. When asked about Iran and Lebanon, we were all mum.
The Bush administration reigned, Arik Sharon was Prime Minister, and President Abbas was sidelined. Hope for a negotiated settlement was nil. When President Bush pushed for the Anapolis agreement, the peace groups were put in the odd situation of supporting it fully. In that period, the peace movement campaigned on small things, like demanding Bush appoint an envoy to the peace process, a position that had been budgeted but not appointed. (A position Obama filled his first month in office.) We fought hard for a pyrric victory of not halting US aid to Palestinian civil society entirely after Hamas was elected.
Compare that to today. 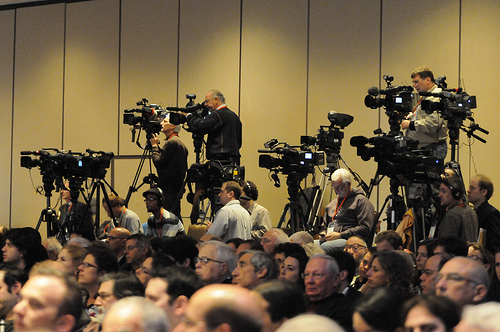 J Street has 160,000 supporters, a budget of $7 million, 50 staff, an affiliated PAC and 501(c)4, and became in 2010 the largest single source of pro-Israel campaign contributions. J Street U and J Street Local are the mergers of Brit Tzedek v’Shalom’s grassroots chapters (a unanimous decision that I was proud to vote in) and the campus network of the Union of Progressive Zionists. J Street is a media darling, quoted regularly opposite conservatives in the NY Times and every major paper and news network, with a Stephen Colbert interview to boot.
President Obama has sent an official delegate to the J Street conference all three times – national security advisor General James Jones in 2009, Dennis Ross last year, and this year Obama personal advisor Valarie Jarrett and Vice Presidential national security advisor Tony Blinken. With 2,500 attendees, it is the fourth or fifth largest gathering of Jews in America. Near every major legislator meets with us on the Hill, even if just to disagree. The conference is co-sponsored by dozens and dozens of Israeli, American and international organizations, most of which did not exist a decade ago and who rely on this conference as their convening space.
We, the leaders and supporters of J Street, are a hotly contended issue in every Jewish community across America — and the ire of Israel’s right-wing. Mainline Jewish organizations fight tooth and nail in a losing battle to obstruct us from Hillels, JCRCs, and, according to Jeremy Ben-Ami, now the Conference of Presidents of Major Jewish American Organizations. We are the definitive home of peace activism inside the community. Our relative small size compared to AJC, AIPAC and the federation system is belied by the obsessive scrutiny given to our actions and statements. Whereas mainline organizations are shrinking and losing young Jews, ours is burgeoning. No single organization can speak to the diverse views of the Jewish peace movement, we are the only institution within the halls of Congress, the White House, and Israeli-Palestinian policy makers.
The magnitude of these changes should not be forgotten by those expecting a quick and easy win. And similarly, gratitude for the peace movement’s tremendous growth to date should neither broker laziness nor be taken for granted. We are all aware of the huge distances to go – the entrenched resistance of AIPAC and the evangelical community, the skepticism of a peace-tired and Palestinian-phobic American (Jewish) public, and the screaming fury of an increasingly marginalized right-wing American Jewry. And most of all, let us not forget we also much account for the most right-wing government in Israel’s history. (Although this year, Israel is sending for the first time an official representative, Deputy Ambassador Baruch Binah.)
Our growth is not done, nor will it come without more tireless work. The conference over the next few days will focus on returning negotiations to the Middle East agenda and preventing a war with Iran. It will be planning how to support Obama’s foreign policy decisions — far better than Bush’s, which themselves are nearly dovish compared to his vying would-be Republican successors. And we will discuss how to push Obama in an election year to not backtrack or sideline peace initiatives. The critics are already lining up to portray us as anti-Semites, Israel haters, and dangerous. (A far different message when they sidelined previous peace movements as hippies. With fear comes hyperbole.) I am incredibly proud to have helped build this movement — and expect to continue to do so until Israel and Palestine see peace.

Inside the Activists' Studio: Sarah From