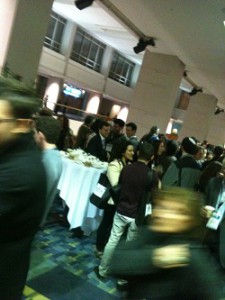 Amos Oz is a wise older man. He appears to be the spiritual father of our movement (hey, I’m new here). He’s also a refreshing, crisp speaker. It’s maddening taking notes from a professional writer and orator; it makes you wish your fingers were phonograph needles and the paper was spinning vinyl. Tonight, he outlined for us idealistic youth the reasons Israel and Palestine need to go to their separate corners and cool down, eventually meeting back in the middle to shake and be okay. Or, as Oz put it: “Make peace, not love.” Oz was the keynote speaker for the first night of J Street 2012, which is how I came to hear him talk divorce for Israel and Palestine, a divorce in which, he notes, “we’ll still have to share the same house.”
Oz started his two-state career by preaching peace and a Palestinian state to skeptical Jewish audiences here and in Eretz Yisrael. Back then, he says, he was marginalized from the right. Now, he comes to J Street – “Thank you, J Street; I have been waiting for you my entire adult life” – and he tells an audience of college students, activists and uber-activists that we are working for a slow, painful separation for Israel and Palestine. Rivals throughout history, he notes, don’t embrace each other and then achieve peace. They make peace through “clenched teeth,” and then, over the course of generations, hostilities subside.
It’s a compelling message. But it’s a hard message to swallow for a roomful of kids who have gone to school with Muslims and Arabs and who know them as friends, engineers, doctors, confidantes, sometimes romantic partners, and can’t understand how their parents can see these human beings as the Other. It’s a tricky thing to refocus on when, speaking for myself, I can’t help but see the failure of peace as a failure to understand each other’s humanity. I have to think about this one really carefully.

It’s hard to imagine that our course is to create a practical, painful solution; in Oz’s words, “a Chekhovian, not a Shakespearean, tragedy. Everybody is upset and disappointed and frustrated, and yet alive.” That we would set those gears in motion, and then in three generations, the embassies Oz envisions in East and West Jerusalem for each other’s respective sovereign countries will be filled with young Israelis and Palestinians whose grandparents laid down arms, and who are just now, in 2065 or so, starting to find common human ground. That, as Rabbi Tarfon taught, we “are not required to complete the task;” yet it feels like I’ve been told (by a very smart man) that I am not ALLOWED to complete the task. Grandpa can be a real buzzkill.
I organize people for a living, and I like to think that campaigns motivate people. Not the steady, smart legislative pressure of J Street on the governments of the US and Israel (though I know VERY well that those smart pressures are what make the real, incremental change that counts in this world). I ask myself: Without some unifying, overarching goal; without mass buy-in; without a vision of a peaceful partnership SOON, if not NOW; without these carrots, what motivates large masses of people to lean on politicians for long-term peace? Where is the buy-in, if the product isn’t sexy?
Yet maybe that is a struggle worthy of our efforts. If the slogans need a little work, maybe a managed divorce can save the household. In any case, as Jeremy Ben-Ami, J Street’s Founder and Chief Executive, put it, “as a Jew, you are simply not allowed to throw up your hands and walk away.” Converging on the DC Convention Center, we are putting our hands back in our pockets and resolutely rejoining the conversation. I feel in great company.
I promised myself I would not (and my boss warned us to not) simply write who said what. But the speakers from the Opening Plenary outlined some great, plural strains of thought within the Pro-Israel, Pro-Peace movement. Stav Shaffir brought the house down with her simple, powerful argument to reclaim the “crazy dream” of Israel from the old guard. She would know – she literally set up tents in rich neighborhoods in Israel, inspiring the Occupy movement and bringing out a full one-tenth of Israel’s population to demand social justice. She has reclaimed the dream and literally helped steer a country with it. My fellow-blogger Shiri leaned over after Stav’s speech – Shiri worked with Palestinians in Israel for a year and a half, very recently – and remarked how hard it was to do what Stav did in Israel.
The kids do want reconciliation, and they’re fighting hard for it. World-class hard; organizing-noticed-the-world-round hard. At the same time, their basic goal remains two states, separate but mutually acknowledging.
This will be a long journey, so long that we can’t see what’s around the next turn. But how can we not love having taken the first steps? And the crazy part is, now that we’ve taken the first baby steps, we have to run; or we’ll never catch up to those bastards who claim to speak for Jews while insisting that blind patriotism is the only way to go. Patriotism, yes. Unity, yes. But, as Amos Oz noted (and I may be paraphrasing – I didn’t catch the full string of epithets as it came out), “why unity behind those racist, imperialist nutjobs over at AIPAC?”
Heh. Awesome.
Fighting words, talk of divorce, tales of revolution and the #MakingHistory Twitter feed is already being attacked from the right and the left. And if I read the conference program right, we’re just getting started. This is the Judaism I know and love – let the debates begin!
Lilah tov,
– Josh

One Good Reason Why Jews Don’t Trust the UN