In the 1920’s, Soviet filmmaker maverick Lev Kuleshov demonstrated how the juxtaposition of distinct, isolated filmed images can suggest psychologically-charged narratives: for example, a shot of a relatively ‘neutral’ gazing face followed by a shot of a bowl of soup leads viewers  to understand that the person in the first shot is hungry. This all-important editing technique in cinema routinely forces us to forge narrative meaning and continuity by connecting isolated images and scenarios. It takes a particularly gifted filmmaker to transcend and even reverse such a tendency in the process of creating dramatic tension.
Such a filmmaker is Joseph Cedar, who most recently directed the dark comedy Footnote.  At the very start of the film, the audience is required to

interpret the context—in this case, the induction ceremony of the Israeli Academy of Arts and Sciences scene—based on the face which confronts us, and not vice versa. Via a tight medium close-up shot, we are introduced to Uriel and Eliezer Shkolnik, a son and father situated side by side amidst the assembled crowd. We later learn  that  have both spent their professional lives as academics. Uriel ultimately disappears from the frame (as we soon learn, from the off-screen dialogue, to ascend to the podium and accept the honour of his induction to this society), but the camera remains fixed on the singularly disturbed visage of his father. As we watch Eliezer’s almost haunted, blank expression, which suggests a deeply repressed quiet fury, we also listen to Uriel’s acceptance speech, in which he relates an anecdote from his early childhood involving his father. Read or heard in isolation, the speech would most likely appear benign–even gracious. However, as we absorb the tortured, humiliated look of defeat fixed on Eliezer’s face as the camera gradually positions him in the frame’s center throughout this long take, and as we listen to the polite collective laughter punctuating Uriel’s clever moments of public oratory, it is nearly impossible to not interpret the son’s words as anything but the severest cruelty.

As the film develops, we learn more about both the father and son and ultimately come to understand the opening scene in a radically new light. Shlomo bar Aba’s performance as Eliezer Shkolnik is absolutely masterful in his understated, yet thunderously pointed, delivery as a defeated, angry neurotic shell of a man completely devoted to the most picayune philological details of Talmudic scholarship, to the exclusion of all else in 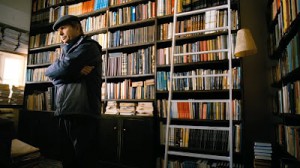 his life.  A filmmaker friend of mine commented that ‘only  in Israel could such a film be made.’ I thought about her comment as I watched the film, but could not help but wonder about Cedar’s intended social statement  in this film.  A film whose drama is based  on  petty grudges harboured for years among academics is a rather curious creation in this tumultuous era.   Initially It was difficult for me to contextualise the motivation behind such a film, which might easily be mislabeled as a family melodrama,  especially  considering Cedar’s previous works (Time of Favor, Beaufort, Campfire  etc,)  which are  powerful, political cinematic statements.   Upon further reflection, however,  it occurred to me that this film poignantly captures certain defining aspects of inter-generational shifts in Israeli social identity.  The plot is merely a pretense, a backdrop, as if were, for presenting us with the Shkolnik father and son, each of whom, in a sense, defines his own  respective generation of Jews in Israel.

Uriel, his wife and family, are the epitome of the modern Israeli family.  Despite the curious addition of a beard and kippah to Uriel’s persona–items which seem strangely devoid of any meaning, since no where in the film is there any indication that Uriel or his wife or son are at all involved in the rituals of Orthodoxy which these appurtenances would suggest–the film emphatically  portrays  Uriel and his wife Dikla as “the classic sabra” couple: raising an apparently rebellious, but quite “hip-looking” son, enjoying each other’s company and conversation, and engaging in  activities which keep them physically active and robust.


When Uriel  is not in his study, delivering well-received talks, or being showered with accolades, the broad-shouldered Uriel is at the gym, playing racquetball with his colleague; Dikla, the very picture of a radiant sabra, practices yoga on their living room floor. Compare this to Eliezer, a slightly hunched-over faint whisper of man, critical to a fault, who resolutely marches to the sub- basement of the National Library each day, and his stoic wife Yehudit (who very much has a Golda Meir vibe going on) and dutifully keeps their house—and Uriel’s secret, which is the dramatic centerpiece of the film.
Ultimately, the two scholars’ appearances shed light on what it means to be a Talmudic scholar in Israel today: Eliezer represents the bygone era of “Wissenschaft” Jews—highly cultured European Jews responsible for having developed Jewish Studies into a respected academic discipline.  These European Jewish academicians did not wear religion on their sleeve, emphatically insisting on presenting themselves as objective–and thus, legitimate–scholars.  Uriel, on the other hand, sports a kippah in order to perform his assumed identity as a Talmudic scholar.  Academia, of course, is not the only facet of Israeli society so heavily marked by religious identity, but it is an excellent symbolic choice. Especially humourous and apropos was a brief off-screen interlude in a discussion of self- absorbed young(er) Israeli Talmud scholars at the reception following the ceremony in the first scene. We hear them parrot in very reductive terms American Talmud scholar Daniel Boyarin’s argument about classical rabbinic Judaism’s ‘tragic’ compromising of Jewish masculinity.  Here, the generational shift represents a reversal of this trajectory from ‘hard’ pre-rabbinic Jewish masculinity to ‘soft’ rabbinic masculinity: the father symbolises the old Wissenschaft guard, and the son symbolises an attempted, modern bridging of the ‘rabbinic’ (at the very least, symbolically), and ‘hard masculinity.’

Indeed, Uriel’s figure as drawn by Cedar may represent mainstream religious Zionism today, which  wants it both ways—it wants to affirm both the authoritative presence of rabbinical Judaism and the quasi-mythical ‘hard masculinity’ promoted so forcefully by the military. However, despite Uriel’s role as a Talmudic scholar and appearance as a ‘masculine man,’  both his father and wife discredit  his carefully crafted identity. In a newspaper interview, Eliezer, ever the philologist, openly scorns his son’s work, which veers more into the terrain of cultural studies, as “an empty jug;” Dikla insists Uriel remains faithful to her not out of loyalty, but out of fear. It is unclear to what extent this statement is true, but what is certain in this film is that selflessness is not rewarded. Uriel’s heroic act of permanently forgoing the Israel Prize so his father will receive the great honour and not be crushed by the disappointment of learning that it was Uriel, not he , who was supposed to receive the prize, is never gratefully acknowledged by anyone.  Everyone around him,  especially the other academics–from his father, to the conniving Yehuda Grossman who ruthlessly traduces his father, and even to his colleagues who act cordially but quietly resent him for his accomplishments.  Uriel’s probity is especially noteworthy and laudable in a country where the word “friar” (פראייר) is casually brandished at anyone who commits altruistic acts of kindness or consideration, and where venial politicians can be the most popular ones.  In sum, Uriel’s character and predicament foreground both the all-pervasive cultural and ethical identity crisis that besets contemporary Israeli society.
The greatest strength of this film is the central actors’ exquisite performances and the subtle, unconventional narrative strategies. Less impressive was the sound design, which felt a bit overbearing and amateurish at times, sometimes almost undermining the brilliance of nearly all other aspects of the film. Certain moments also seemed a bit too ‘easily symbolic,’ such as the scene in which the two generations of the Shkolnik family sit in a row, watching an Israeli theater troupe perform the musical Fiddler on the Roof live, in Hebrew; this is the scene in which after Uriel whispers to Yehudit his secret. In the car riding back from the show, the thickly uncomfortable silence is interrupted by Eliezer quietly singing “Mesorah! Mesorah!” to himself (the Hebrew version of the song “Tradition”), in the backseat.  This kind of heavy-handedness seemed unnecessary. For better or worse (though, generally speaking, for better), Cedar’s past work in action film shines through in interesting ways here too, transforming otherwise banal moments and interactions into pathos-laden fireworks of cinematic drama. But overall, I would still argue that the film’s most powerful moments are those, such as the aforementioned opening scene and the nearly absurdist penultimate scene showing Eliezer rehearse for the Israel Prize ceremony by shaking hands with imaginary politicians and leaders, in which Cedar allows nuance and simply great performances to lead the way.

The Rise in Israeli Anti-Semitism