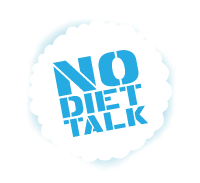 If you work for a Jewish organization, you’ve probably experienced the phenomenon of food being everywhere.  Sometimes it’s gross, sometimes it doesn’t belong to you, but it’s pretty ubiquitous. With this infusion of nutrients come statements such as the following (overheard), in reaction to delicious baked goods:
“Oh, no, that’s so bad. I can’t eat that.”
“I’d have to do to the gym if I ate that.”
“I can’t believe you walked past it! You have so much willpower!”
It saddens, but doesn’t surprise me, that it was all women making these comments. It also doesn’t surprise me that people think of food as having moral value-it’s good or it’s bad, it’s not something that nourishes you or that you should enjoy, that you give to others so they can enjoy it too.What we really mean when we say, “That food is bad,” is “I am a bad person for eating it.” If we eat food that we enjoy (or if we eat, period), we should immediately torture ourselves emotionally and/or physically, and make sure everyone around us  knows that we’re doing so, and in turn, make sure that those people feel a certain way about their own eating and exercise habits.
Diet culture is relentless and misogynist, and it affects us in ways we aren’t even aware of. (I’m holding back here, folks. I’m not getting into the crazy, exploitative, capitalist that is the diet industry. See how I did that?) Maybe you’re not trying to trigger people when talking about the 5 pounds you’d like to lose, but people hear that shit. It creates body hatred and it erodes relationships between women (who, let’s face it, are a lot of the population working in Jewish organizations in a certain capacity).
There’s a certain tension between culture, Jewish and American, and food. In spite of our bodies being real bodies, we’re bombarded with the ideal that is impossible to achieve. We know that Jewish women are  living with eating disorders, that the statistics are on the rise, and that many cases are unreported. Part of Jewish (or any other ethnic group’s) assimilation into American culture means adopting the ideals of the physical body. I often think of dieting and diet culture as a shiny red ball thrown at women as if to say, “Look over there!” As in, think about how to be this specific, empty  version of perfect, put your energy into getting skinny at all costs, instead of channeling it into redistributing power. (And by the way, diet talk doesn’t only affect women, it affects everyone.)
I’m proposing that Jewish organizations adopt a “No Diet Talk” policy, with the aim of moving towards a different culture around food and bodies in our organizational spaces. This doesn’t mean you can’t commiserate about your diet behind closed doors with a trusted colleague. It doesn’t mean that you can’t be on a diet. It does mean that when there’s food to be enjoyed, you let people enjoy it without talking about how you are on the quest to lose weight. You don’t comment on other people’s food choices, (“Are you really going to eat that?”) or  talk about how much you go to the gym, or how much you need to.
This does mean that policing ourselves. It’s likely that we don’t even realize how much we talk about diet and weight until we don’t do it anymore. Saying,“You look great! Did you lose weight?” is so common, it’s practically small talk. We can do better.