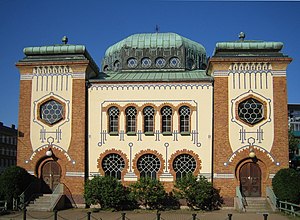 Following is a guest post by Rabbi Rebecca Lillian, current resident of Malmo, Sweden.
In early March, when I was asked to write a column about Jewish life in Malmö, I began like this: Google “Jews in Malmö.” Most of the results will be about the rise in anti-Semitism, the hostility between Muslims and Jews, the anti-Semitic rants of the mayor, and the number of Jews who are fleeing Sweden’s third largest city.
Six weeks later, you can skip the Google search. The Jewish media have their eye on Malmö, thanks to the most recent spewing of idiotic, anti-Semitic rants by mayor Ilmar Reepalu. This time, he tried to claim that the Jewish community of Malmö had allowed itself to be infiltrated by the white supremacist Sweden Democrat party in order to attack Muslims. When confronted, Reepalu admitted that his accusation was baseless. Dominos have begun to fall since then. The leader of his Social Democrat party scolded the mayor, and word has it that Reeplu might even be open to hearing from Jewish citizens.  It remains unclear whether there will be any real impact on Reeplalu’s mayorship.
Yet, although Malmö’s Jews do face anti-Semitism from some hateful, even violent neighbors as well as from the mayor, things have changed since 2010, when the Forward published an article titled, “For Jews, Swedish City is a Place to Move Away From.”  In fact, last month I used that title as a foil, declaring Malmö to be a delightful place to move to.  The Jewish community here is undergoing a true renaissance and, on this Yom Hashoah,  many members look toward the future with hope.
The revitalization of the Malmö Jewish group uses the “unified community” model employed elsewhere in Europe. Jews choosing to affiliate join a single unified community, then pick a synagogue to attend. In Stockholm and Berlin, for example, there are many choices: several Orthodox shuls, a Masorti style congregation, and others. For many Jews, the choice is nominal; they rarely go to shul.  The highlight of this system is that all non-religious activities are under the auspices of the one community. Expenses and person-power for cultural and educational events, libraries, adult education opportunities, museums, and more, are shared.  Despite its origins in limiting the number of “official” Jewish communities allowed in any given German city, today the “unified community”  is a model that could well serve many  North American Jewish organizations.
Malmö is still evolving toward a true unified community, but the Jewish Community now includes the Egalitarian Synagogue of Malmö (ESM), which meets two or three Shabbatot per month and at least once for every holiday. Several members of its Board are also involved in the creation of the local Limmud organization. Last March, nearly 100 people attended south Scandinavia’s  first Limmud conference, held in nearby Lund. Plans for next year’s Limmud are already underway.
And a funny thing is happening on the way to confronting the reality of being a Jew in Malmö. People are experiencing a new type of Jewish pride. Perhaps some of it is being sparked by the “Kippah Walks”  being held in response to the anti-Semitism. A group of Jews and allies walk through the city wearing kippot, stars of David, and other visibly Jewish symbols. There has even been talk of some sort of “Jewish pride” festival. I like to think, though, that some of this enthusiastic Jewish self-esteem stems also from the “havurah” effect:  a group of Jewish adults taking their religious and cultural lives into their own hands, and creating a DIY style Judaism that hasn’t existed here before.
On the second night of Pesach, for example, 40 adult and teen-aged Jews gathered for a havurah style seder at an ESM board member’s home. Everyone contributed something: matzo balls, a commentary on the Four Children of the seder, a melody for Chad Gadya. When I asked in my very American fashion for people to share what narrow place they personally wanted to liberate themselves, several participants demurred in a characteristically Swedish way. But one of them announced boldly that she wanted to be loud and proud about being a Jew in Malmo. Several others then proclaimed the same thing.
Last evening, which just happened to be erev yom hashoah, I was discussing with ESM board members how we might increase opportunities for adult education. Someone suggested that we offer a “Judaism 101” course to both Jews and non-Jews, perhaps at a neutral place such as a café.
“What if we just took out an ad saying, “Do you want to learn more about what it means to be Jewish?” Come to this cafe, on this date. What if we just didn’t worry…..”
Someone else responded that this would mean becoming more public as Jews than Malmö Jews have ever been, even before the outbreak of anti-Semitism. Then he smiled. Then we all did.

Where they have burned books, they'll end in…