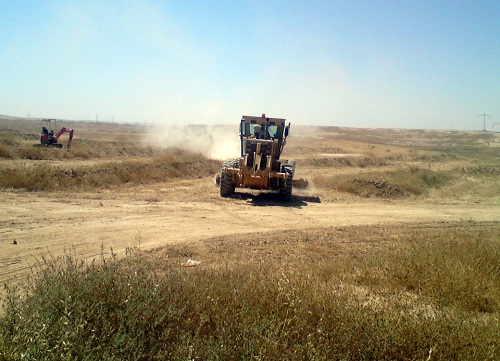 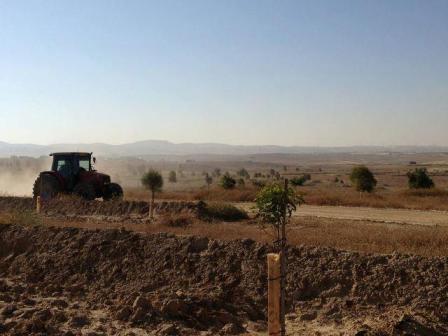 Despite hearing from hundreds of people, KKL-JNF resumed plowing disputed land in Al-Arakib on Monday.
We need to keep the pressure up! Join us in writing to Jewish National Fund in Israel and the United States. Tell them to stop planting on legally disputed land in Al-Arakib and to end their involvement in forestation on the remains of demolished Bedouin villages and disputed Bedouin land.
Residents of Al-Arakib have documents and other evidence of their traditional rights to their land dating to the times of the Ottoman Empire and the British Mandate, prior to the establishment of the state of Israel.  Yet the Israeli government refuses to recognize their land claims. The State has demolished the village dozens of times in the last year and a half, leveling homes, livestock pens, and hundreds of fruit and olive trees, all to make way for Jewish National Fund forests. The government remains embroiled in protracted legal disputes with the residents about their ownership of the land.
Earlier this year, the leadership of KKL-JNF promised our colleagues at Rabbis for Human Rights in Israel that they would not plant on four plots of land in Al-Arakib that are involved in ongoing legal disputes. KKL-JNF also issued a public statement saying that it “does not plant even a single tree on land that is in legal dispute in court.” Russell Robinson, CEO of JNF-USA reiterated this position to Rabbi Jill Jacobs, Executive Director of Rabbis for Human Rights-North America, in a conversation they had just last week. But now it seems as though the Jewish National Fund is changing its tune.
Just over a week ago, KKL-JNF equipment arrived in Al-Arakib and began preparing one of the disputed plots of land for planting. Yesterday, KKL-JNF returned again and plowed more land for planting in this disputed plot. KKL-JNF has spent the last month working on other plots of land in Al-Arakib that are due to be adjudicated in Israel’s High Court in December 2012.

Srugim Update – Two more episodes Wed. night at the JCC, plus watch on The Jewish Channel!