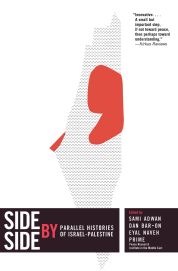 My new go-to primer on the Israeli-Palestinian conflict is Side by Side: Parallel Histories of Israel-Palestine, published by the Peace Research Institute in the Middle East (PRIME), a team of 24 joint researchers and educators in the region. And though it’s intended more for educators than for armchair historians, it’s supremely innovative and recommended for us all.
This book’s simple yet ingenious innovation is a layout common to every English-Hebrew siddur: the right facing page is the Israeli narrative and the left facing page is the Palestinian side, each describing the same events. As Sari Nusseibeh’s back cover blurb says, it’s a “pioneering effort not only in the context of Israeli-Palestinian politics, but in the writing of history.”
I don’t recommend trying to read both narratives at once, since parallel chapters are real, full histories with footnotes, photos and stories. Trying to do so will give you a headache. But for the first time, opening a chapter to, say, the Balfour Declaration immediately makes both sides’ claims and reactions easy to find. No skipping around, flipping to the next chapter, or trying to keep it all in your head.
This book makes the chasms between narratives poignantly clear. For example, page 168 is in the middle of the chapter about the 1950s-1960s. The Israeli page features a photo of Adolf Eichmann on trial in Jerusalem; the Palestinian page features a photo of a Palestinian refugee woman embracing a relative through a border fence. The Israeli chapter is titled “The State of Israel: The First Decades” and faces “Years of Homelessness and Despair.”As one reads about the bombshell effect Eichmann’s trial had on Israeli Jewish identity, you can’t help but glance at the other page describing the systematic dispossession of Palestinian property under absentee laws. (Like I warned, a headache in the making if you read the whole thing this way.)
The chapters cover roughly 20 year periods starting in 1917, often with whole chapters dedicated to seminal events like the 1947 and 1967 wars. Sadly, the history stops with the Taba peace talks in 2001, effectively the end of the peace process. The authors recommend that this experiment is a first and should be rewritten in a decade, acknowledging especially that narratives evolve. And kudos to the writers for calling out the symmetry of narratives does not erase the asymmetry of power, another facet that often dogs these educational efforts.
Those of us versed in both narratives may be quite familiar with the different traumas important to both sides. But to see them so vividly and loyally portrayed side by side reminds me of how important efforts like this remain. For avid consumers of Middle East histories, this is an innovative quick reference guide. And for those entirely new to this issue, I highly recommend any book that is simple, clear and fair to both sides — for which this approach is uniquely, brilliantly qualified.
Lastly, the book is a touching tribute to the work of Israeli historian Prof. Dan Bar-On, who co-founded PRIME and this its central project with Palestinian historian Prof. Sami Adwan but died in 2008 before seeing its completion. The final chapter features testimonials from many of the 24 contributing Israeli and Palestinian teachers. Their personal stories working with each other and their hopes and challenges of teaching young people about the “other” are themselves proof of overcoming challenges and creating new hope.

J Street U and Birthright: together at last!

Why I Didn't Celebrate Yom Ha'atzmaut