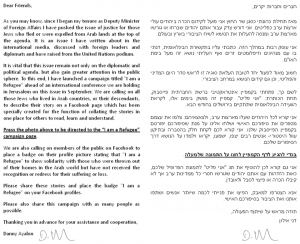 Today, the Israeli Foreign Ministry launched a social media campaign “I am a Refugee” to deflect criticism from Israel’s appalling treatment of African asylum seekers. In the 1948 founding of the State of Israel, while Jewish extremists were shooing Palestinians from their villages, many Arab countries ejected their Jewish populations and seized their properties. Conveniently this is two-for-one issue for the nationalist camp, shifting blame over the lack of Israeli-Palestinian peace progress back on Arab countries.
I would think that Jews of Arab origin would be outraged that their dispossession is again raised only as a talking point against Palestinian refugees. As a decidedly secondary and repressed narrative in Israeli society, the true-to-life injustice suffered by Jews from Iraq, Syria, Lebanon, Iran and other places is shunted aside because of the uncomfortable consequences such an equivalence would have on the Palestinian refugee issue. Meaning, if Mizrachim are granted repatriation or compensation back in the Arab world, then such would grant Palestinians the same in Israel.
So by raising this issue in such a way, Danny Ayalon and the Israeli government seem to implicitly say that invoking justice for Mizrachim is just a political game. There won’t be any justice — but they’re happy to abuse that memory for political gain. More cynical injustice to heap upon an already unfair situation. I can only hope that Danny Ayalon cooked this up himself without involving the helpless foreign service professionals who painfully chafe at this government’s incessant foreign affairs stupidity.
To help African asylum seekers being unrightfully and inhumanely arrested and deported, get involved in RIGHT NOW: Jewish Americans Advocating for African Asylum Seekers in Israel.

Another legal step for gays and lesbians in Israel?

A Little Taste of the Rhetoric