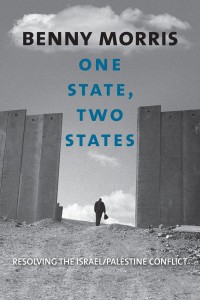 Israeli historian Benny Morris is on the promo circuit with an extended interview in Haaretz for a re-release of his 2009 book, One State, Two States: Resolving the Israel/Palestine Conflict. Coincidentally I read the book this month and, while I appreciate its history of Zionist thought, I found its treatment of Palestinians thought lacking.
Morris compiles a capable summary of the evolution of competing one-state, bi-national, and two-state visions within the Zionist movement from the turn of the century through today. But his attempt to do so for the Palestinians is short, shallow and ultimately unpersuasive.
The detail that Benny Morris describes in early Zionist deliberations over ethnic cleansing and bi-national alternatives is missing from his treatment of Arab/Palestinian nationalism. On the Zionist side, he cites declassified meetings of the Jewish Agency and the World Zionist Congress alongside diaries of David Ben Gurion, Judah Magnes and others. On one hand, he cites, founding Zionist leaders desired a Jewish state encompassing nearly all of Israel’s present neighbors, beyond even Transjordan. On the other hand, these founders were ever-conscious of the democratic limitations of this vision. Between the Holocaust and Arab rejection, the Zionist establishment took what it could get, far short of Transjordan. First the Peel Commission, then the UN Partition Plan, then returning the Sinai, and finally the two-state consensus today. Again and again, Morris says, the Jews exhibited pragmatic compromise. 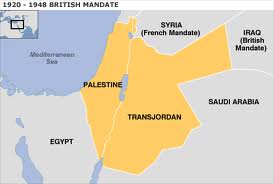 But I find that portrayal overly rosey and Morris seems to brush away the suggestion that Ze’ev Jabotinsky’s Revisionist Zionist vision isn’t dominating Israeli political thought today. Morris attempts to say that while the Revisionist leadership quietly gave up on conquering Transjordan by 1967, even the secular Palestinian leadership (“if you can call them that”) still desires to reclaim Jaffe. But that is far from settled and today’s Likud sits in a coalition that opposes the two-state solution by ideology and charter. The Likud base and every party further to the right oppose it with a frightening seriousness. It is only through American coercion that Binyamin Netanyahu uttered support for the two-state formula.
More worrisome, the undemocratic strain in Zionism has won Israel’s heart, if polls of Israelis today and its school-age children are a sign. A 2010 poll of political views of Israeli teenagers aged 15-18 revealed that 64% recognize that Arab citizens are discriminated against — yet 59% of those said they shouldn’t have full equality. Further, 41% said those who object to a Jewish, democratic state should be stripped of citizenship. The contradiction of a democratic state stripping minorities of citizenship should be lost on no one, making us certain these soon-to-be voters don’t know what democracy means. I take our present morass seriously and fear the future will be even worse.
On the Palestinian Arab side, most of what Morris offers are the charters of Hamas, Fatah and the PLO quoted unnecessarily at length. And while he makes a half-decent case for why these documents are symbolically important, he dismisses the changes made to them as Palestinians moderated their views over the years. It’s truly disappointing that a scholar of Morris’ stature cannot offer any deeper insights. Instead of the describing the many factors that influenced the evolution of Arab nationalism over 100 years, Morris takes the easy way out by painting Haj Amin Al-Husseini, Yasser Arafat and Mahmoud Abbas as part of an unchanging continuum.

Some of the contrast that Morris chose to omit is covered in The Arabs and The Holocaust: The Arab-Israeli War of Narratives by Gilbert Achcar. This work delves deeply into the debates within Arab nationalism during and after the Holocaust. Whatever one may think of Achcar’s conclusions, he translates an array of thinkers within early Arab nationalism that is missing from the simplistic crayon-drawing Morris provides.
Especially when it comes to present day politics, palpable hopelessness and distrust color Morris’ writings so pronouncedly that I nearly had to hold the book at arm’s length. As the book progresses, he gradually drops it’s early pretenses at dispassionate fair-mindedness. Here in Haaretz’s extended interview, Morris’ offers his concluding thesis about the differences between the Jews and Arabs:

But the Zionist movement didn’t always support the idea of compromise.

“[Compromise] was the guiding line of the Zionist movement in the years 1948-1977, and has been again since 1992. Aside from a few years of euphoria in which the right held power and propounded the idea of Greater Israel, the Israeli position was one of compromise. The brief euphoria dissipated very quickly. Since the first intifada in 1988, about two-thirds of Israelis support territorial compromise. The Palestinians, no. They have consistently − even if outwardly they seemed ready for compromise − never accepted the legitimacy and the claims of the Zionists. The Palestinian movement doesn’t care about Jewish history. They deny the connection between the Jews and the Land of Israel. The Jewish narrative is completely foreign to them.”

Lastly, all the analysis ends with a whimper. Within the last ten pages, Morris’ grand solution is simply that Israel give Palestine to Jordan. While Morris revealed this was negotiated between Israel and Jordan as a real possibility on at least one occasion after 1967, today it comes off as as fanciful.
By the end, Morris’ opinion is that you can always trust the intentions and words of Jews, but not those of Palestinians. It is the trap of every ethnic conflict across the globe that one’s own side did everything possible, a view that is never true and must always be challenged. Had he delved deeper into the Palestinian side, this book would have made a worthy addition to the discussion of resolving this conflict. Absent this, it’s just half-worthy.

An Open Letter to Nakba Deniers