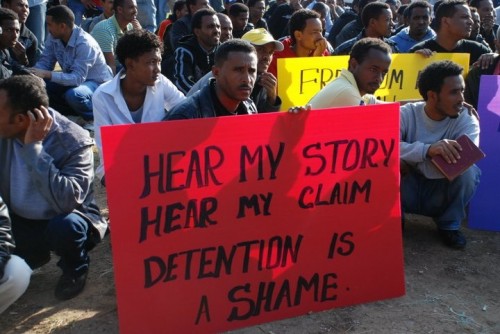 Update 10/13: A judge has ordered a temporary injunction prohibiting the round up, following a petition by six Israeli human rights NGOs.
Eli Yishai, Israel’s Interior Minister, said about the 60,000 Africans seeking asylum in Israel that  “Until I have the option of expelling them, I will imprison them and make their lives miserable.”
Expulsion isn’t a viable option for the international condemnation that would erupt if Israel sent thousands of people back to war-torn regions. Instead and to appease racist incitement, Netanyahu’s government passed a law that allows for illegal entrants into the country to be jailed for three years without a trial. And on October 15, MK Yishai intends to start first with 15,000 asylum seekers from Sudan.
This from the North American coalition of individuals fighting this inhumane procedure, Right Now: Jewish Americans Advocating for African Asylum Seekers in Israel:

Please join our October 15th campaign by making a call, sending an email, or sending a fax to the following departments of the Israeli government every day until October 15th. The Interior Minister, Eli Yishai, plans on rounding up and detaining 15,000 Sudanese asylum seekers in Israel if they do not “voluntarily” leave by then.
Hello, my name is _____________ and I live in _____________. I am calling from the Right Now coalition of Jewish Americans Advocating for African Asylum Seekers in Israel. I would like a few minutes of your time. I’m calling to express my deep concern about your plan to round up and detain 15,000 Sudanese asylum seekers on October 15th. I strongly encourage you rescind this plan. Jews and Rabbis across America are deeply upset by the Israeli government’s policies in dealing with some 60,000 African Asylum seekers. It is not a Jewish value to “oppress a stranger.”
Offices to Contact (do as many as you can):
1)    Defense Minister: Ehud Barak
Secretariat Division 03-6976483/4 03-6975241
2)    Minister of Foreign Affairs, Avigdor Liberman & Deputy Foreign Minister Danny Ayalon
[email protected]
Tel. 972-2-5303111
Fax 972-2-5303367
Foreign Ministry Consular Department–Irit Shneor
[email protected]
3)     Embassy of Israel to the US-Michael Oren
Tel: (202) 364-5500
[email protected]
4)    Interior Ministry-Eli Yishai
Joseph Edelstein Interior Ministry [email protected]
Complaints Department of Immigration and Population Authority
Fax: 02-6294750
Phone: 02-6294701/2 from 13:00 to 15:00
E-mail: [email protected]

The neo-Confederate/ultra-Zionist convergence is very real