While building up excitement for their Centennial celebration, Hadassah, The Women’s Zionist Org of America was all abuzz about prayer services at the Kotel with Women of the Wall.
Today, following the arrest of several participants and the violent detainment of Women of the Wall leader Anat Hoffman, Hadassah isn’t saying much at all.
Women of the Wall leader Anat Hoffman arrested at the Kotel
Nobody attends a Women of the Wall service without knowing that being arrested for wearing a tallit or praying aloud is a distinct possibility. At the group’s monthly Rosh Chodesh services, some women choose to save their voices and their prayer shawls for the Torah service that takes place at a nearby location. Others take the risk. Regular participants advise first-timers regarding how to avoid arrest.
It stands to reason, then, that the Hadassah leaders who were building up anticipation for the joint Women of the Wall/Hadassah prayer service on Tuesday evening were prepared for possible police action against the group of 200 women. One might also imagine that they were set to offer a statement in the event that such action occurred. As of now, however, Hadassah has declined to take a public stand on this issue. Their website and Twitter feed (@Haddashorg) refer the public to JTA articles and Women of the Kotel statements. Hadassah leaders remain silent on the violent detainment of Nashot Hakotel leader Anat Hoffman, or the general mistreatment of women who pray at the Kotel.***
Meanwhile, Hadassah plans to present PM Netanyahu with an award named for Hadassah founder Henrietta Szold.
What would Henrietta Szold do in such a case?
Given that she struggled to be admitted to the Jewish Theological Seminary of America and was finally allowed to matriculate together with rabbinical students under the condition that she never ask to be ordained, in all likelihood she would have been at the Kotel, determined to find a way for women to pray there.
At the very least, no doubt Anat Hoffman is correct when she says that the Women of the Wall organization is more deserving of the prize than Bibi is. The vision of Henrietta Szold, whose unique brand of leadership encompassosed the social feminist movement of her day as well as an inclusive, diverse vision of Jewish peoplehood, was much more akin to the work of Women of the Wall than to any aspect of the current Israeli government’s leadership. In any case, the women’s Zionist organization should not be silent now regarding this violation of the rights of women in Zion.
Anat Hoffman in her own words: 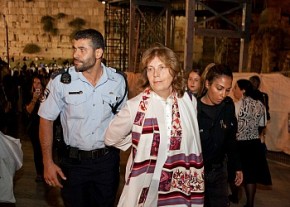 *** Update: Hadassah has published a one-sentence resolution regarding this:

In Jerusalem, at the National Business Meeting of the Centennial Convention of Hadassah, the Women’s Zionist Organization of America, delegates unanimously approved a resolution reaffirming its commitment to and support for freedom of worship for women at the Western Wall.
It is worth following the replies to this by Hadassah members, which have a little more bite:
http://www.hadassah.org/site/apps/nlnet/content3.aspx?c=keJNIWOvElH&b=8347749&ct=12246339&notoc=1

Negotiating Civil Liberties: Inclusion for Some